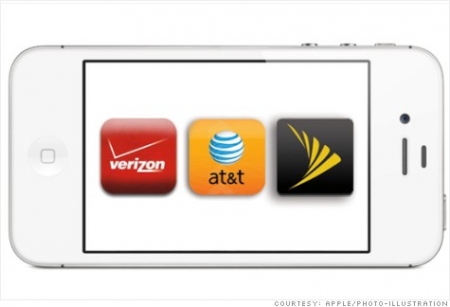 NEW YORK  -- Reviewer Rob Pegoraro is putting the new iPhone 5 through its paces and keeping a running journal of his impressions.

You may think you're buying an iPhone from Apple for $199 and up, but in most cases you're really signing up for 24 months of payments to one wireless carrier or another. Choose wisely.


If what you care about most is widespread coverage, it's easy: As CNNMoney's graphic shows, Verizon's 4G LTE coverage overwhelms AT&T's, which in turn dwarfs Sprint's. But if your region has or will soon have LTE from all three -- or if you're fine with 3G -- your choice remains wide open.

Choosing on cost isn't so simple. Sprint has the cheapest plan for a data-hungry user: $80 for unlimited data and texting, plus 450 peak minutes. If you're positive you won't use much data and won't text at all, however, you can pay $60 a month at AT&T for a Nation plan with only 300 MB of data and zero text messages included.

Adding tethering -- sharing your iPhone's Internet access with nearby computers -- expands the spreadsheet again. Sprint (S, Fortune 500) charges $20 for that; with a 2 gigabyte limit on tethered use, your total hits $100. Your cheapest realistic option for better LTE coverage, stingy 1-GB plans excluded, costs $109.98: AT&T's $39.99 Nation plan plus $20 for unlimited texting plus $50 for a 5 GB tethering-allowed data plan. That's a penny less than AT&T's 4 GB Mobile Share (required for FaceTime video calling over mobile broadband) and Verizon's 4 GB Share Everything plan.

To talk and use 3G or 4G data at the same time, AT&T's your only option. (You can talk and use WiFi simultaneously on all three.) But if you want to use the phone affordably overseas by popping in a global SIM card, forget AT&T (T, Fortune 500) -- it won't unlock the iPhone for use with other carriers until you exit a contract. Sprint will do so once you're 90 days into your contract.

Verizon's press representative said the carrier requires 60 days' tenure on a contract before unlocking, but customers have been able to use other carriers' nano-SIM cards -- even those of AT&T -- in Verizon (VZ, Fortune 500) iPhone 5 models.

In some parts of the U.S., you can now buy an iPhone 5 from the prepaid carrier Cricket Wireless. It charges $500 and up for the phone itself but asks just $55 a month, no contract required, for unlimited calling and texting plus 2.5 GB of full-speed data. Other regional carriers are also now selling the iPhone 5 bundled with service plans, sometimes at smaller discounts.

Cricket has been shipping the iPhone 4S unlocked for use on international carriers, but it's unclear if it will offer the iPhone 5 that way. Two PR reps haven't answered several of my queries.

Should you get this phone at all? That's the hardest question. The iPhone 5's improvements -- battery life, camera, design, performance -- are welcome but don't all place it that far ahead of competing phones. And in one major respect, that awful Maps app, Apple (AAPL, Fortune 500) has inflicted a severe and unnecessary injury on itself.

An iPhone 5 does include one longer-term advantage, though: Apple's history strongly suggests you'll get operating-system updates for the next few years. The neglectful habits of Android vendors, who typically take many months to push out updates or skip them entirely, offer no such reassurance. To top of page