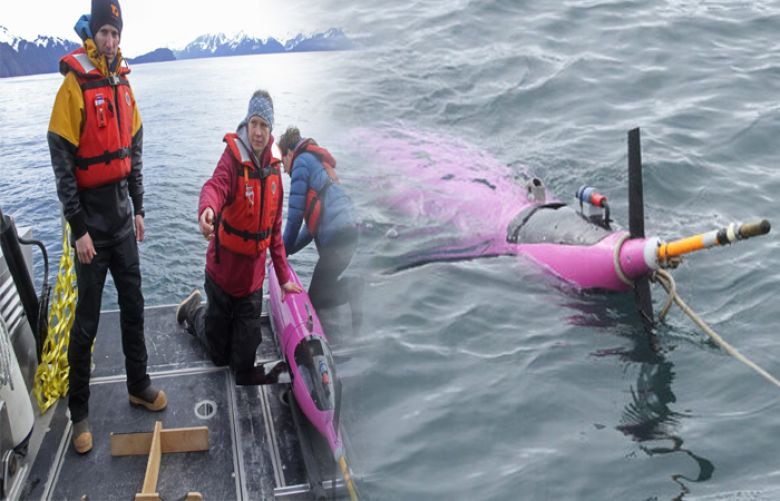 In the cold, choppy waters of Alaska’s Resurrection Bay, all eyes were on the gray water, looking for one thing only. It wasn’t a spout from humpback whales that power through this scenic fjord, or a sea otter lazing on its back, munching a king crab.

Instead, everyone aboard the Nanuq, a University of Alaska Fairbanks research vessel, was looking where a 5-foot (1.52-meter) long, bright pink underwater sea glider surfaced.

The glider — believed to be the first configured with a large sensor to measure carbon dioxide levels in the ocean — had just completed its first overnight mission.

Designed to dive 3,281 feet (1,000 meters) and roam remote parts of the ocean, the autonomous vehicle was deployed in the Gulf of Alaska this spring to provide a deeper understanding of the ocean’s chemistry in the era of climate change. The research could be a major step forward in ocean greenhouse gas monitoring, because until now, measuring CO2 concentrations — a quantifier of ocean acidification — was mostly done from ships, buoys and moorings tethered to the ocean floor.

“Ocean acidification is a process by which humans are emitting carbon dioxide into the atmosphere through their activities of burning fossil fuels and changing land use,” said Andrew McDonnell, an oceanographer with the College of Fisheries and Ocean Sciences at the University of Alaska Fairbanks

Oceans have done humans a huge favor by taking in some of the C02. Otherwise, there would be much more in the atmosphere, trapping the sun’s heat and warming the Earth.

“But the problem is now that the ocean is changing its chemistry because of this uptake,” said Claudine Hauri, an oceanographer with the International Arctic Research Center at the university.

The enormous amount of data collected is being used to study ocean acidification that can harm and kill certain marine life.