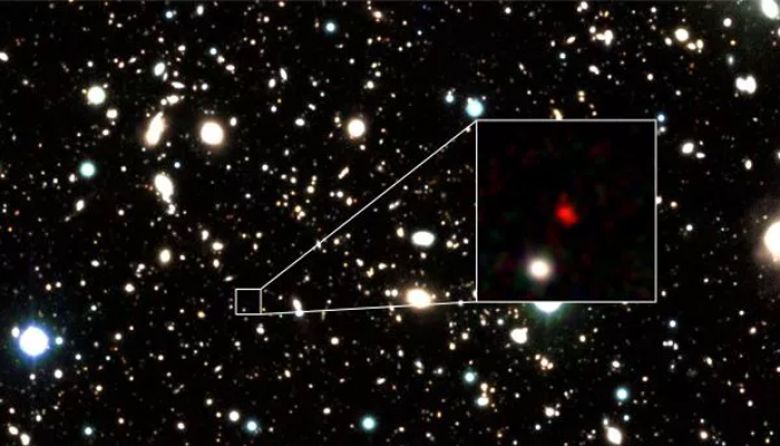 Using NASA's Hubble Space Telescope, scientists have discovered the most distant individual star on record, a bright behemoth they nicknamed Earendel - Old English for "morning star" - because it existed during the dawn of the universe.

Researchers said the star, very hot and blue in colour, was estimated at 50 to 100 times the mass of our sun while being millions of times brighter. Its light travelled for 12.9 billion years before reaching Earth, meaning that the star existed when the universe was just 7% of its current age.

Read More: In a First: Private mission readies for launch to ISS

Earendel was born roughly 900 million years after the Big Bang event at the outset of the universe. It belonged to among the earliest generations of stars at a time when the universe was quite different than it is today.

"This really opens up a new window into those early days of the universe," said astronomer Brian Welch of Johns Hopkins University in Baltimore, lead author of the research published this week in the journal Nature.

"We're seeing the star in the time period that is often referred to as Cosmic Dawn - when the first light in the universe was starting to turn on with these first stars and when the first galaxies are starting to form," Welch added.

Explaining its nickname, Welch said the researchers figured that the "morning star" existing during the Cosmic Dawn period was "a good parallel."

"It's also for the 'Lord of the Rings' nerds out there," he added, noting that Earendel is the same Old English word that author J.R.R. Tolkien used for inspiration for a character from his work "The Silmarillion" that becomes a star.

In observing objects as distant as Earendel, scientists are peering into the deep past because of the vast distance the light from the star traveled to reach Earth - in a sense, using Hubble as a time machine.

"So normally when we look at very distant objects, what we're seeing is the light from an entire galaxy - so millions of stars all blended together - and we've been able to see those out to even farther distances. But in this case, thanks to a very massive cluster of galaxies in the foreground, the light from this one star has just been very, very highly magnified, so we're able to see this single star at a much greater distance," Welch said.

The first Hubble images of Earendel were obtained in 2016, with 2019 follow-up observations. The researchers are hoping to study it further using the next-generation James Webb Space Telescope, due to become operational within months after being launched in December.

Welch said the researchers were surprised by the discovery, saying, "Yeah, there was definitely a period of wondering whether this could possibly be real."

Until now, the most distant single star on record was one nicknamed Icarus that existed 4 billion years after Earendel.

Earendel was probably much different than stars populating the universe today. Welch said it was likely composed mostly of hydrogen and helium, with perhaps trace amounts of heavier elements including carbon, nitrogen and oxygen.

Welch said the first stars formed roughly 100 million years after the Big Bang explosion and that perhaps one or two generations of stars had preceded Earendel's formation.

Heavier elements did not exist until they were forged in the fusion caldrons of the cores of the initial generations of stars, then were blasted into space when these earliest stars exploded at the end of their life cycles.

Even though scientists on Earth can now see its light, Earendel itself certainly no longer exists, with such huge stars having relatively short lifespans, Welch said. It existed for perhaps a few hundred million years before dying in a supernova explosion.