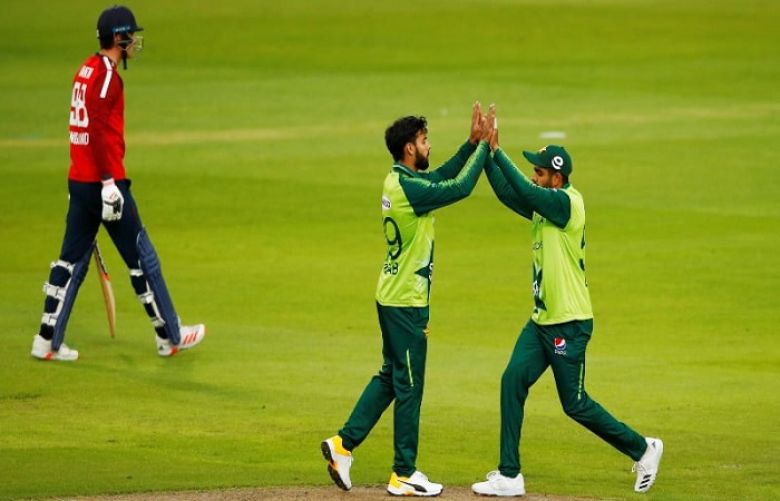 England defeated Pakistan by five wickets in the second Twenty 20 International at Old Trafford on Saturday.

Pakistan had established a record earlier of the highest T20 International score at Old Trafford ground in Manchester with a target of 196 runs set against England.

In the past, England had scored the highest runs — 191 — on this ground.

Mohammad Hafeez and Babar Azam both hit fifties as Pakistan piled up an imposing 195-4 against England.

Hafeez top-scored with 69 after Pakistan captain and opener Babar, the world's number one-ranked T20 batsman, launched the innings with 56.

But the rest of 50-over world champions England's attack lacked penetration, with seamer Tom Curran conceding 46 runs — including 23 off one over.

In a fixture where both sides were unchanged after Friday's opener in a three-match series ended as a no result washout, the tourists were sent into bat by Eoin Morgan, the England captain.

But Babar, who pulled the first ball of the match from fast bowler Saqib Mahmood for four, was unconcerned as he struck boundaries off spinners and seamers alike.

Fellow opener Fakhar Zaman saw his brisk 36 end when he skyed Rashid to long-on to leave his side 72.

Babar completed a fine fifty with a superb extra-cover drive off Rashid — his seventh four in 37 balls faced.

But Rashid had his revenge when Babar miscued a pull to deep midwicket.

Hafeez, whose pulled six off Mahmood kept the runs coming when he pulled a careless Curran no-ball, an above waist-high full toss, for six.

Hafeez's scooped four off Mahmood to long leg which saw him to a 26-ball fifty including four fours and three sixes before he was dismissed off the penultimate ball of the innings when he drove Curran to Morgan at extra-cover.

Both teams were unchanged from the sides that played out a no result in Friday's first of a three-match series in Manchester, where rain ended the match with England 131-6 off 16.1 overs and Pakistan yet to bat.