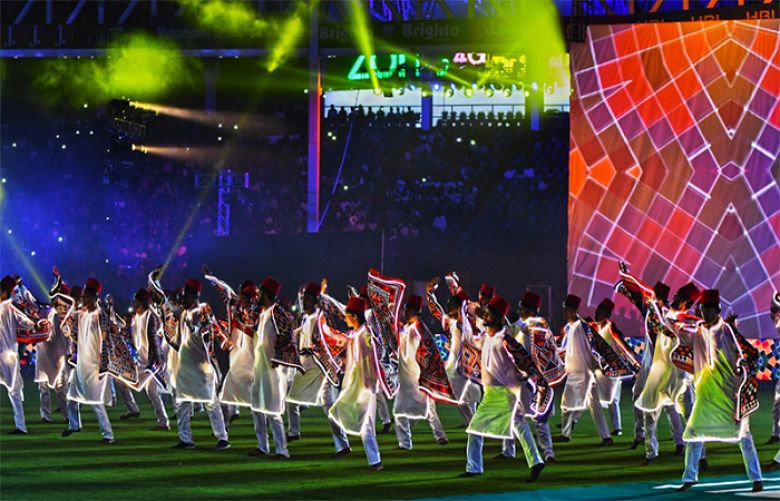 Excitement all around as PSL 2020 opening ceremony begins in Karachi

Accompanied by a vibrant fireworks display in the background, Ali Azmat, Arif Lohar, Haroon and Asim Azhar, concluded the festivities with an explosive performance of the PSL 2020 anthem Tayyar Hain, before clearing the field for the first match of the tournament between the Quetta Gladiators and Islamabad United.

The show began with the national anthem, before a small army of drummers and trumpet players, dressed in the national colours, kicked the ceremony into high gear by performing an instrumental version of the official PSL 2020 anthem.

Congratulating the people of Karachi, the chief minister stated that in the past, he had asked the Pakistan Cricket Board (PCB) to stage at least a single match in Karachi.

"But it was not possible at the time," he said, adding that the credit for the opening ceremony goes entirely to the people of Karachi. Thanking the PCB, he called for the people to show the world the true spirit of Karachi.

Meanwhile, PCB Chairman Ehsan Mani stated that in 2019 the board had promised that the entirety of the tournament will be staged in Pakistan, and today the board has fulfilled that promise.

"Next year, we will try to include Peshawar in the league," he said, adding that the entire credit for the league goes to cricket lovers residing in Pakistan.

Thanking the provincial governments of Punjab and Sindh, as well as law enforcement agencies, the chairman said that none of this would have been possible without their cooperation.

Mani also welcomed foreign players to the country, and called on the people to send a message to the world that "Pakistan is ready".

The first performance of the night, a dazzling display of local talent and tradition, was a Sufi medley featuring singer Sanam Marvi, qawwals Fareed Ayaz and Abu Mohammad, and the band Soch.

Taking the stage, pop singer Sajjad Ali performed a mashup of his greatest hits, including Babia and Soni Lag Di, to a packed stadium.

Taking things up a notch, Aima Baig, accompanied by performers brandishing umbrellas decked with neon lights, won the crowd over with her upbeat song.

Following these performances, Fakhre Alam called the representatives of all the PSL teams, including "honorary" Pakistani Darren Sammy, to the stage to take an oath to "follow and respect the rules of the league and to play with respect and integrity, endeavouring to serve as role models for people around the world".

Following the oath, singer Abrarul Haq, dubbed the "undisputed king of bhangra" by the hosts, had the crowd on their feet as he jumped off the stage onto an awaiting rickshaw-type vehicle, urging the people to show their enthusiasm.

But, perhaps the most awaited performance of the night was that of qawwal Rahat Fateh Ali Khan, who did exactly what he does best by belting his heart out in front of an adoring crowd.

The tournament will be the biggest draw in the country for the next four weeks.