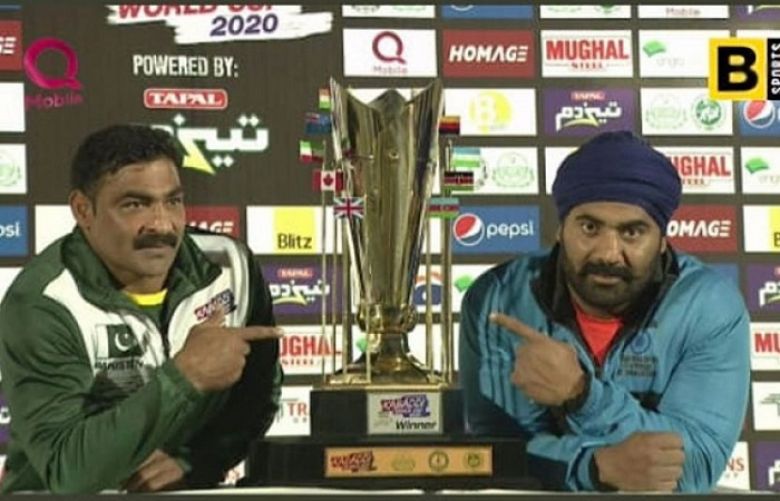 Pakistan emerged victorious from a close contest against India in the final of the Kabaddi World Cup on Sunday in Lahore's Punjab Stadium.

The hosts won 43-41 to become Kabaddi world champions for the first time.

Pakistan won the toss and decided to raid first. In the beginning, India was leading and maintained the margin of a couple of points until the first session was over.

The contest between the South Asian neighbours remained neck-on-neck throughout the allotted time, two sessions of 20 minutes each with a break of five minutes.

Then Pakistan overtook India, the coach of the latter team rose to object a point scored by Malik Binyameen. Indian team’s coach Harpreet Singh intervened in the last moments of the match by raising objection to a point scored by Binyameen but the referee overruled the objection.

Binyameen who along with Irfan Mana and Shafiq Chishti, proved to be too heavy for their Indian counterparts as the three played a significant role in the win.

After the match, the winning side completed a lap of honour around the stadium. A huge number of spectators came to watch the final between the arch-rivals. After the match ended, spectators lifted Pakistan players on to their shoulders, dancing to the beat of drums.

The match was attended by several dignitaries of the Punjab government.

Pakistan and India had yesterday defeated Iran and Australia, respectively, to reach the final.

This is the first time the Kabaddi World Cup was held in Pakistan. All of the previous six-circle-style kabaddi world cups have been hosted by India with the most recent event taking place in 2016.

The tournament was eight-days long with matches in Lahore, Faisalabad, Kartarpur and Nankana Sahib.

Other than India, teams from Iran, Canada, Australia, United States, Sierra Leone and Kenya also participated in the event.

The winning side completed a lap across the stadium after the match as the stadium cheered them on, while congratulatory messages poured in by players, politicians and fans.

Cricketer Imad Wasim lauded the team for its comeback after a weak first half. "43-41 is the final score. And that’s after being down after the first half. Fantastic effort from the boys to crown Pakistan Kabaddi champions."

43-41 is the final score. And that’s after being down after the first half. Fantastic effort from the boys to crown Pakistan Kabaddi champions. Thank you to all teams for coming to Pakistan! #KabaddiWC2020 #ibleedgreen ?? pic.twitter.com/pkrpLf97rz

Wasim also thanked the teams for coming to Pakistan to participate in the tournament.

Journalist and cricket statistician Mazher Arshad also noted that the match was a closely fought one, in his congratulatory tweet.

Arshad added that he "loved the Punjabi commentary" during the match.

In another tweet, Arshad hailed the return of sporting activities in Pakistan, noting that the Marylebone Cricket Club was also on a visit to Lahore, while the Pakistan Super League was about to start in the country.