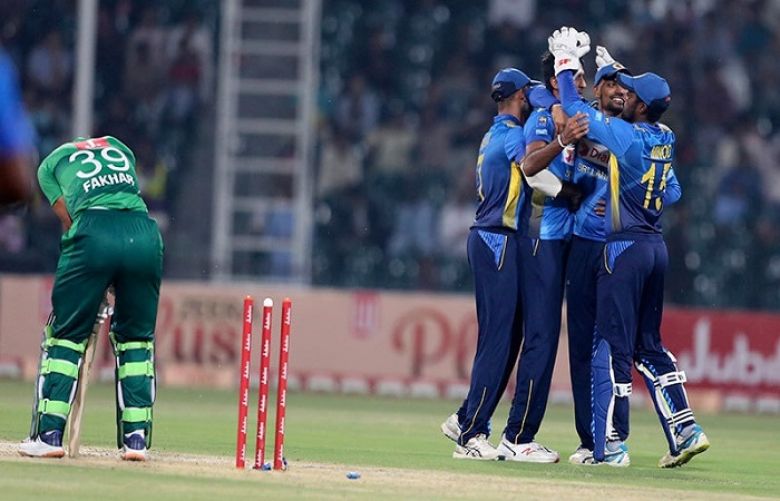 A blend of questionable team selection, a familiar middle-order collapse and generally lethargic play saw Pakistan lose to Sri Lanka by 35 runs in the second T20I at the Gaddafi Stadium Lahore on Monday.

The result saw Sri Lanka take an unassailable 2-0 lead in the three-match series. It was the inexperienced islanders' first-ever win over Pakistan in a bilateral T20I series.

Captain Sarfaraz, not for the first time in the series, came in at two-down with the responsibility on his shoulders to bail the team out in a difficult run chase. On the other end was Ahmed Shehzad — another in desperate need of some runs.

This time, however, Sarfaraz was looking in much better touch, signified by a four and a six on back-to-back balls in the 6th over.

The eighth over proved a nightmare for Pakistan batsmen, and it pretty much decided the fate of the match and the series.

Shehzad, picked in the side despite intense criticism, disappointed again, dancing down the track against Wanindu Hasaranga and getting bowled out.

Umar Akmal was out lbw the very next ball and captain Sarfaraz followed the duo back in the pavilion a ball later.

The sequence of three wickets in four balls by Hasaranga meant that Sri Lanka tightened their grip on the match as well as the series.

At this point Asif Ali and Imad Wasim were at the crease. Things could have gone really ugly for the hosts but the duo batted responsibly and put together a 50-run partnership from nowhere. There was still a lot to be done though as the run rate had skyrocketed into double figures.

Imad's impressive 29-ball 47-run knock concluded when he, after hitting a couple of cheeky fours, missed one and was adjudged out lbw.

Earlier, the in-form Danushka Gunathilaka and Avishka Fernando opened the innings for Sri Lanka, whereas Imad Wasim and Mohammad Amir shared the new ball for the hosts.

Gunathilaka was again looking in the mood, hitting several boundaries early on. But Wasim struck in the 3rd over, having the leftie nick one back to Sarfaraz Ahmed. He contributed 15 this time.

The loss of their star batsman did not seem to bother the visitors who kept on finding boundaries. However, Fernando and newcomer Bhanuka Rajapaksa's promising looking partnership was broken in the 5th over when the former attempted a run against the gazelle-like Shadab Khan, who hit the bulls eyes. Sri Lanka were 41-2 at the end of a quarter of their overs.

Needlessly risky runs were a constant theme in the first few overs and Pakistan could have had another run out, had all their fielders been like Shadab.

Rajapaksa and Shehan Jayasuriya made sure that no further wickets were lost in the next five, taking the score to 80-2 at the end of 10 overs.

The hard-hitting Rajapaksa brought up his 50 off just 31 balls in the 12th over. He kept on pounding the Pakistani bowlers and had his side eyeing 200.

The 94-run stand between the two was finally broken in the 15th over when Asif Ali ran out Jayasuriya.

Rajapaksa (77) was caught in extra cover before Sri Lanka lost another to a run-out — the innings' third till that point.

Umar Akmal and Ahmed Shehzad were retained despite their failure with the bat in the opening match.

Iftikhar Ahmed and Faheem Ashraf were replaced by Fakhar Zaman and Wahab Riaz.

Sri Lanka did not make any changes to the line-up that pretty much outclassed the hosts by 64 runs in the first T20 in Lahore on Saturday.