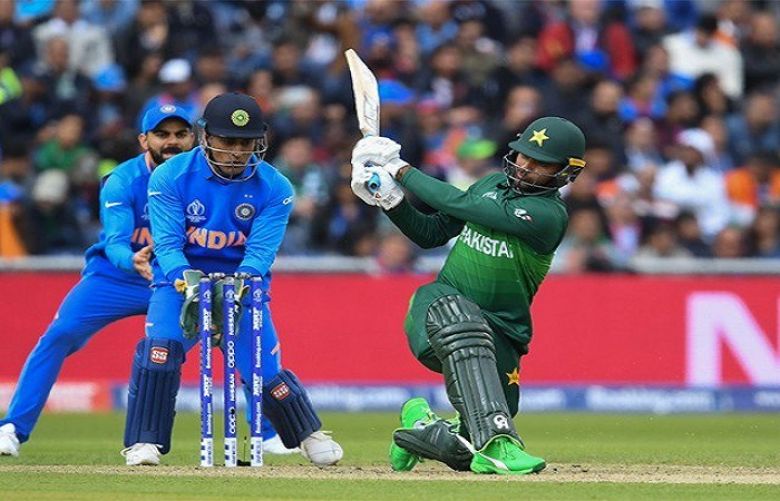 India secured an emphatic victory over Pakistan at Old Trafford in a key World Cup fixture on Sunday, maintaining their unbeaten streak against the Greenshirts at the tournament.

India set Pakistan a 337-run target to chase down. However, after a spell of rain interrupted the Pakistan innings in the 35th over, the target was adjusted to 302 runs, while the length of the innings was revised down to 40 overs.

Once the covers came off, Imad Wasim and Shadab Khan kept up a steady rhythm but it just wasn't enough to score the 136 needed off 30 balls to win.

Rohit Sharma was named Man of the Match for his second century this World Cup.

Lokesh Rahul, promoted in the absence of the injured Shikhar Dhawan, and Rohit Sharma started the Indian innings, whereas the pairing of Mohammad Amir and Hasan Ali shared the new ball for Pakistan.

Amir, as he has done multiple times in the World Cup so far, started with an excellent opening over — a maiden. The second one bowled by Ali was expensive, however, with eight coming off it, including a boundary off an inside edge.

Indian openers started cautiously, not taking any risk against Amir, who had his tail up. The southpaw pacer was bang on target but he was way off with his follow through, receiving two warnings from the umpire for walking on to the danger area of the pitch.

With chances already at a premium, Pakistan missed a gilt-edged opportunity to run out Sharma in the 10th over, with Fakhar Zaman throwing the ball at the non-striker's end when he should have targeted the batting end.

After the first 10 overs, India were 53-0 and slowly upping the run rate. In the next dozen overs Sarfaraz tried almost every bowling option he had at his disposal but the elusive breakthrough did not come.

The first wicket finally fell in the 24th over when Wahab Riaz had Rahul caught. The setback did little to affect the direction of the Indian innings thanks to captain Virat Kohli arrival. By the 35th over India were 206-1 and set for a late push thanks to the many wickets in hand.

Sharma's 140-run knock and his 98-run partnership came to an end in the 39th over when Ali had him caught. Amir, who was excellent but wicketless in the opening spell, was brought back for the final 10 overs.

He was dispatched for two boundaries in the 44th over but immediately responded, first taking the wicket of Hardik Pandya (26 off 19) and then MS Dhoni in the 46th over. The flurry of wickets pegged India back some but the dangerman Kohli was still in the middle and looking menacing at 71 when rain interrupted play.

After play resumed, Amir picked the prized wicket of Kohli but replays later showed that the India skipper may have been unlucky with his dismissal. In the end, India finished at 336-5 in their allotted 50 overs.

The Men in Blue dominated almost all sessions of the play but were pegged back slightly in the final five overs, falling short of the 350-plus they were odds on to amass at one point.

Amir was easily the pick of Pakistan bowlers, taking three wickets for just 47 runs in his 10.

The Greenshirts started cautiously, not taking any risk. Lady Luck appeared to have smiled on them in the 5th over when the impressive Bhuvneshwar Kumar tweaked his hamstring and left the field.

But it proved to be a false dawn as his replacement, Vijay Shankar removed Imam with the first ball he bowled, trapping the southpaw in front of wickets.

Babar Azam walked in and helped Fakhar Zaman stabilise the ship. However, the duo were playing a bit too cautiously, allowing the run rate to jump up. After 10 overs, they were 38-1 and 87-1 after 20.

Just when it seemed they were set enough to step up a gear or two, Azam (57-ball 48) was sent packing by an incredible delivery by Kuldeep Yadav in the 24th over.

The tricky left-armer struck again in the 26th, this time getting rid of Zaman (62 off 75). The wheels came off completely in the 27th over as Hardik Pandya removed Mohammad Hafeez and Shoaib Malik on back-to-back deliveries.

The match as a contest was effectively over at this point, with Pakistan needing a miracle of miracles to somehow salvage anything from the game.

Vijay Shankar put another nail in Pakistan's coffin with a delivery that took skipper Sarfaraz out. The inside edge sent the ball clattering into leg stump and the captain was sent off the pitch in the 35th over.