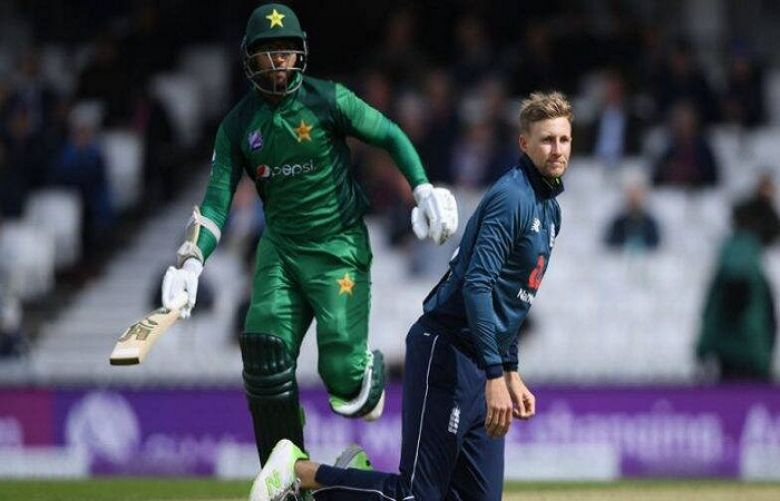 England beat Pakistan by six wickets to win the third one-day international at Bristol on Tuesday and take a 2-0 lead in the five-match series.

World Cup hosts England made light of a seemingly challenging target of 359, Jonny Bairstow top-scoring with 128 as they won with 31 balls to spare.

Earlier, Imam-ul-Haq made a career-best 151 in Pakistan's 358 for nine, with England paceman Chris Woakes taking four for 67. The 23-year-old left-hander's innings was also the highest individual score by a Pakistan batter against England at this level, surpassing the 138 made by his opening partner, Fakhar Zaman, in a 12-run defeat at Southampton on Saturday that left the home side 1-0 up in this five-match series.

Meanwhile, Chris Woakes did his chances of being included in tournament hosts England's final 15-man squad for the World Cup no harm with a return of four wickets for 67 runs in a maximum 10 overs.

But team-mate Joe Denly's World Cup chances suffered a setback, with the leg-spinner — playing in place of the rested Adil Rashid — bowling a couple of full tosses in solitary over costing nine runs before he was taken out of the attack by England captain Eoin Morgan.

Warwickshire pace-bowling all-rounder Woakes made an early double strike to reduce Pakistan to 27 for two after Morgan won the toss and decided to let England chase — they generally prefer to bat first — ahead of the World Cup.

Woakes' last ball of the first over, an excellent full-length delivery, had Fakhar edging to second slip where Test skipper Joe Root held a juggled catch.

Number three Babar Azam was then clean bowled by a Woakes off-cutter.

But new batter Haris Sohail was quickly into his stride in ideal batting conditions on a sunny day.

The left-hander hit two superbly timed fours off successive Woakes deliveries through point and then drove David Willey through the covers for a boundary.

But Sohail's excellent run-a-ball 41 came to an unfortunate end when called through for a single by Imam, he was run out by bowler Tom Curran kicking the ball onto the striker's-end stumps.

Pakistan were then 95 for three in the 17th over.

But Imam and Asif Ali, whose 52 was his second successive fifty, repaired the damage with a fifth-wicket partnership of 125.

Imam, the nephew of Pakistan great and selection chief Inzamam-ul-Haq, went to his sixth hundred in 27 ODIs — and first against England — off 97 balls.

He continued to take the attack to England, driving Willey for a straight six and next ball glancing the left-arm quick for four.

Imam then surpassed his previous ODI best of 128 against Zimbabwe at Bulawayo last year.

Asif holed out off Woakes and Imam's excellent innings ended when he was bowled, giving himself room, by Curran.

Imam faced 131 balls including 16 fours and a six.

Tailenders Hasan Ali and Shaheen Shah Afridi hit out to leave England, who had also rested Jos Buttler following the star batter's blistering 110 not out at Southampton, with a decent chase for victory.