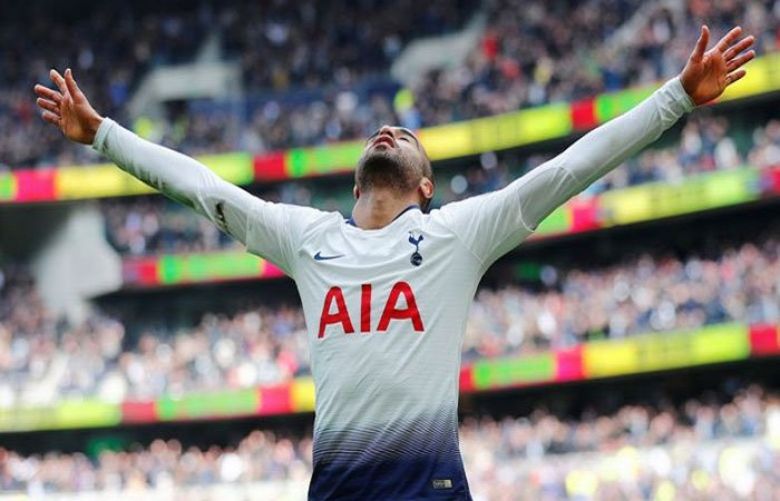 With Chelsea not in action until Sunday when they take on title-chasing Liverpool, Spurs cruised past the already-relegated Yorkshire side at their new Tottenham Hotspur Stadium to move on to 67 points, one ahead of Maurizio Sarri’s side.

Spurs also forged four points clear of their neighbours Arsenal, who travel to Watford on Monday.

Two Paul Pogba penalties earned a lethargic Manchester United a 2-1 victory over West Ham United and lifted them above Arsenal into fifth place.

“They played better than us, it is fair to say, I don’t think anyone will disagree,” United manager Ole Gunnar Solskjaer said after his side secured only a second win in their last six matches in all competitions.

“We got away with it, sometimes we have lost when we should have won, so over a season it evens itself out.”

At the other end of the table, Cardiff City edged closer to the drop with a 2-0 defeat at Burnley, while Brighton & Hove Albion’s third successive league defeat, a humiliating 5-0 home loss to Bournemouth, heightened their relegation fears.

In the absence of the injured Harry Kane and the rested Son Heung-min, though, Spurs still made it three wins out of three at their inspiring new home, Victor Wanyama’s early goal being followed by Lucas’s treble, which featured two late strikes.

The victory was an important one for Tottenham, who face a daunting trip to league leaders Manchester City in the Champions League on Wednesday, before the same fixture takes place in the Premier League next weekend.

“After the game when Harry got injured everyone believed Sonny was going to step up and is going to be the man, but we have seen today Lucas got a hat-trick and it was an unbelievable afternoon for him,” Spurs manager Mauricio Pochettino said.

“It is going to help and bring him confidence. We have ahead a very tough period, two games against Manchester City and then Brighton.”

Five points from safety, Cardiff travelled to fellow relegation candidates Burnley knowing they need to start picking up points with time running out this season, but they found themselves behind just after the half-hour mark.

Chris Wood’s close-range header did the damage, with the New Zealand international making sure of the win in stoppage time, inflicting a third successive defeat on Cardiff, who have just five games left to avoid the drop.

Brighton are anything but safe in 17th after slipping to a third successive defeat of their own, with Bournemouth’s comprehensive victory moving them onto 41 points with safety in sight.

Brighton and Cardiff meet on Tuesday at the Amex Stadium, where victory for Brighton would leave them eight points clear of the effectively doomed Welsh club.

Elsewhere, 16th-placed Southampton also moved one step closer to survival with a 3-1 win over Wolverhampton Wanderers, while relegated Fulham secured just their fifth league win of the season with a 2-0 victory over Everton.

Sunday’s action kicks off with second-placed Manchester City facing a tough trip to Crystal Palace — one of the few sides to have beaten Pep Guardiola’s men this season.