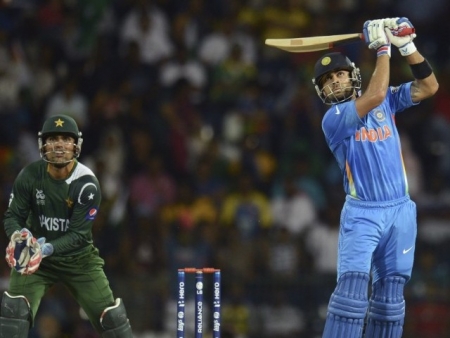 India, who would have been knocked out of the tournament had they lost, skittled Pakistan for 128 on a slow pitch and then surpassed the modest target in 17 overs, thanks largely to Kohli’s unbeaten 78 off 61 balls.

Pakistan have never beaten India in either the 50-over World Cup or the World Twenty20, in which they contested a thrilling final in 2007.

Sunday’s match was only the third Twenty20 international between the two countries and the result set up a thrilling shoot-out for the two semi-final berths from group two.

Australia lead the group with two wins, India and Pakistan have one each, while South Africa have lost both matches so far.

The last round of group matches will be played on Tuesday with Australia taking on Pakistan and India playing South Africa.

The pair put on 74 for the second wicket, with Sehwag making 29 before he holed out in the deep off Shahid Afridi.

Singh, who is making his comeback from cancer treatment, claimed two wickets and threw a direct-hit run-out in Pakistan’s innings. He then scored 19 not out in an unbroken third wicket stand of 54 with Kohli to carry India home.

The impressive win was set up by the bowlers as seamer Lakshmipathy Balaji claimed three wickets and off-spinner Ravichandran Ashwin took two to leave Pakistan in tatters after they elected to bat.

Shoaib Malik top-scored with 28, but only one other batsman managed to touch 20 in the face of steady bowling by the Indians.

The match began on a scintillating note as the first two overs produced 13 runs each, besides a dropped catch in the slips by Sehwag and the wicket of Imran Nazir.

India hit back to grab four more wickets in the next nine overs, two of them in successive overs by Yuvraj, to reduce Pakistan to 59-5 by the 10th over.

Big-hitter Afridi, who was promoted to number three, had made 14 when he lofted Balaji to deep mid-wicket where Suresh Raina was perfectly positioned to take the skier.

Yuvraj, who was treated for a rare germ-cell cancer between his lungs earlier this year before returning to action at the World Twenty20, ran out Yasir Arafat with a direct throw.

Bilateral cricket ties between the neighbours, suspended after the Mumbai attacks in 2008, are set to resume in December when Pakistan tour India for three one-dayers and two Twenty20 games.