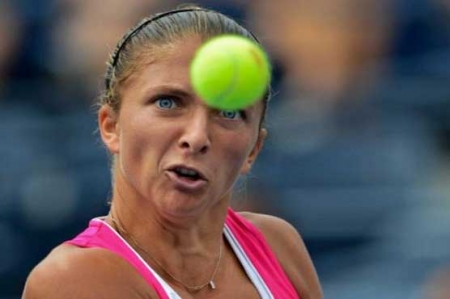 "It was a tough match on this fast court," Sara Errani said.

Sara Errani of Italy beat France s Marion Bartoli 3-6, 6-2, 6-2 on Wednesday to advance to the quarterfinals of the Pan Pacific Open.

After struggling in the first set, the sixth-seeded Errani broke No. 9 Bartoli in the second game of the second set and never looked back.

"It was a tough match on this fast court," Errani said. "I didn t start off well but neither did she. She got a little tired in the second set and that s when I started to play better."

Errani, who has won three WTA titles this year, will face the winner of Wednesday s third-round match between Nadia Petrova and Petra Martic in the quarterfinals.