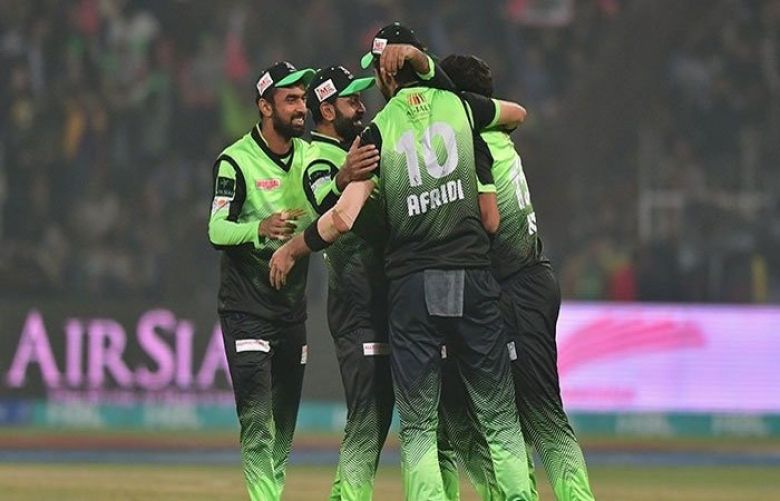 Lahore Qalandars on Sunday put up a clinical performance to defeat Multan Sultans by 42 runs and secure their first Pakistan Super League (PSL) in seven editions.

Although Lahore had handed Multan a stiff 181-run target, still they were required to be at their best both with the ball as well as in the field.

And, they just did that. Once again skipper Shaheen Shah Afridi deployed Mohammad Hafeez early, and he didn't disappoint as he removed the in-form Mohammad Rizwan for 14 runs with the score of 36 runs in four overs.

Fakhar who failed with the bat, but was light wire in the field as he ran out Shan Masood with a brilliant direct-hit, and also took a great catch of Aamer Azmat to reduce Multan 46-3.

Asif Afridi was removed four runs later, and the dangerous Rilee Rossow was sent back for 15 by young pacer Zaman Khan as Multan's batters were falling like a pack of cards.

Khushdil Shah and Tim David smashed some boundaries, but they had a huge task against a world-class bowling attack of Lahore. Khushdil was bowled by Haris Rauf, while David was sent back by Shaheen after Fakhar took a great diving catch.

After that Willey, Tahir, Rumman was removed in the wink of an eye, as Tahir was the last man to go when Rauf took a great catch, and the entire Gaddafi Stadium erupted in joy.

Among the bowlers, Shaheen took three, Hafeez and Zaman two, while Wiese and Rauf one as Lahore won their maiden PSL crown.

Lahore, after electing to bat first, got off to the worst possible start as they were reduced to 25-3 in 4.2 overs. The in-form Fakhar Zaman was removed for just three runs by Asif Afridi with Shahnawaz Dahani taking a great catch, while Abdullah Shafique was also removed by Asif.

After that, Mohammad Hafeez showed his experience and class as he steered the ship for Lahore by playing sensibly. With Kamran Ghulam, he forged an important 54-run partnership to steer the inning.

Hafeez took the attacking mode as he went after the opponent bowlers, and was finally removed for 69 runs by Dahani. He scored those runs off 46 balls with one six and nine fours.

After, his dismissal Harry Brook and David Wiese registered a 43-run stand in just 2.4 overs as they went rampant against the Multan bowlers.

Wiese remained not out for 28 runs off just eight balls with three sixes, while Brook scored 41 runs off 22 balls.

In terms of bowling for Multan, Asif was the stand out bowler with brilliant figures of 3-19 in four overs, while leggie Imran Tahir gave away just 22 runs in a wicket-less four-over spell. Dahani went to the cleaners in the late overs as he ended with figures of 1-34 in three overs. Rumman Raees conceded 35 runs in just two overs.