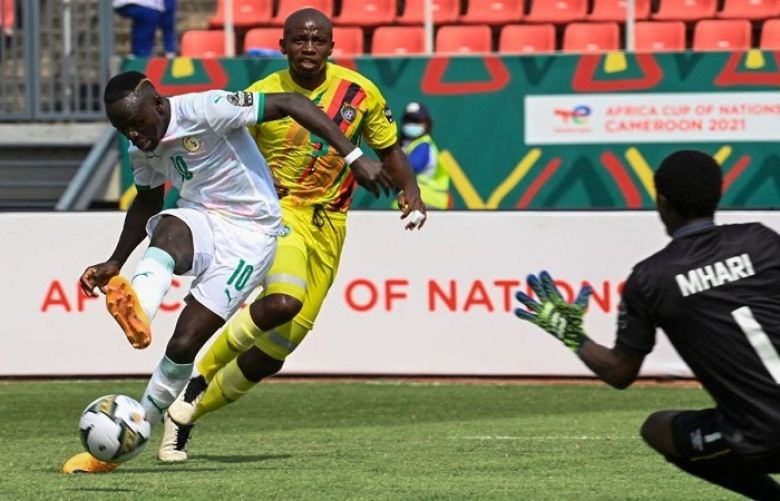 File photo Senegal, Morocco off to winning starts at AFCON

Former Southampton duo Sadio Mane and Sofiane Boufal both scored to give Africa Cup of Nations title contenders Senegal and Morocco winning starts to their campaigns in Cameroon on Monday.

Mane, who switched to Liverpool in 2016 after two years with the Saints, netted a penalty seven minutes into added time to deliver a fortunate 1-0 Group B victory over Zimbabwe in Bafoussam.

A few hours later it was the turn of Boufal, now at French Ligue 1 Angers after four years with Southampton, to score and earn Morocco a 1-0 Group C win over Ghana in Yaounde.

Gabon overcame the absence of captain Pierre-Emerick Aubameyang to beat debutants Comoros 1-0 in the other game in the section.

With Arsenal star Aubameyang sidelined after testing positive for Covid-19, Aaron Boupendza slammed in from an acute angle on the quarter-hour to snap a five-game winless run at the tournament.

Guinea edged Malawi 1-0 through a 35th-minute goal from Issiaga Sylla and they share first place in Group B with Senegal.

The results maintained a run of one-goal victories in a tournament that finally kicked off on Sunday after being postponed by a year due to the coronavirus pandemic.

Cameroon came from behind in the tournament opener to beat Burkina Faso 2-1 and Cape Verde struggled to a 1-0 win over 10-man Ethiopia in the other Group A clash.

On Tuesday, record seven-time champions Egypt confront three-time winners Nigeria in the northwestern city of Garoua in what promises to be a highlight of the 36-match first round.

Disaster struck gallant underdogs Zimbabwe when a shot hit the right arm of Kelvin Madzongwe and Mane sent Petros Mhari the wrong way with the penalty on 97 minutes to settle a lacklustre affair.

While Senegal, seeking a first title after twice finishing runners-up, dominated possession, they rarely threatened to break down a well-organised Zimbabwe defence.

"It was difficult playing in such hot conditions, and not having an opportunity to play any warm-up matches affected us," said Mane.

"We left it very late to score, but the most important issue was to secure maximum points and we achieved that. Now we must try to perform better against Guinea."

After a quiet start, Mane burst between two defenders on 24 minutes only to see his low shot, aimed at the far corner of the net, blocked by Mhari.

As half-time approached in the Cameroonian highlands, Mane turned provider, setting up unmarked Idrissa Gueye, who was let down by his first touch as he prepared to shoot.

Senegal survived a scare as full-time loomed with a Zimbabwe free-kick creating a half chance before the ball was grasped by goalkeeper Seny Dieng, deputising for Edouard Mendy, who is recovering from Covid-19.

With a cagey affair between Morocco and Ghana seemingly heading for a goalless stalemate, Boufal turned in the goalmouth and fired a loose ball past goalkeeper Joseph Wollacott on 83 minutes.

"I told the players I was proud of them. We had a lot of problems. We were missing four or five players in attack and I was forced to use some boys who were playing in the Cup of Nations for the first time."

After a cagey, foul-riddled start at a 42,500-seat stadium named after former Cameroon president Ahmadou Ahidjo, Thomas Partey came close on 32 minutes for Ghana with his free-kick going just over the crossbar.

That was a signal for both teams to show more urgency and Morocco captain Romain Saiss got his head to a free-kick in a crowded goalmouth only to see it fly over.

Just before half-time when a solo run by Joseph Paintsil offered Ghana hope of a goal, but his finish was embarrassing, sending his shot well wide.

Paintsil threatened again early in the second half with a lengthy dribble only to pass poorly on the edge of the box.

Paintsil fired goalwards with 18 minutes remaining only to be denied by a brilliant one-hand save from Yassine Bounou.

"It was a tough game against one of the best teams in CAN. I think Morocco were a bit lucky," said Ghana coach Milovan Rajevac.