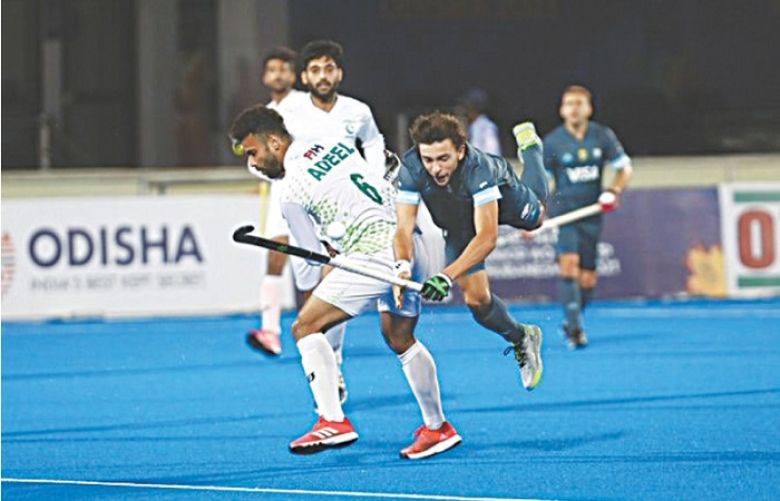 Pakistan failed to reach the quarter-finals of the FIH Junior World Cup on Sunday after losing their last pool match to Argentina 4-3 at the Kalinga Stadium in the Indian city of Bhubaneswar.

By winning this game, Argentina reached the quarter-finals of the mega event with two wins from three games in pool D.

Argentina took lead in the 10th minute through a field from Bautista Capurro. Pakistan captain Rana Abdul Waheed equalised in the 17th minute by scoring on a pass from team-mate Rizwan Ali on a penalty corner.

In the 20th minute, Argentina’s Ignacio Nardolillo scored which again gave them lead. In the 28th minute, Pakistan earned a penalty stroke on which promising drag flicker Rizwan Ali scored to make it 2-2.

In the closing moments of the second quarter, Argentina’s Francisco Ruiz scored their third goal giving them a 3-2 lead. Ignacio Ibarra’s goal in the 47th minute extended Argentina’s lead to 4-2.

Aqeel Ahmed scored the third goal for Pakistan on a pass from Roman on a penalty corner in the 53rd minute. The 4-3 scoreline remained intact till the end of the match.

After finishing third in their pool, Pakistan will now be competing in a classification match with the US on Nov 30.

Meanwhile, Spain too booked their berth to the last-eight stage by thrashing South Korea 9-0 in a pool C encounter as they finished with six points from two wins, ending second behind the Netherlands, who thrashed the US 14-0, in the group.

In another pool D match, Germany handed Egypt an 11-0 hockey lesson to top the group and reach the last-eight stage.