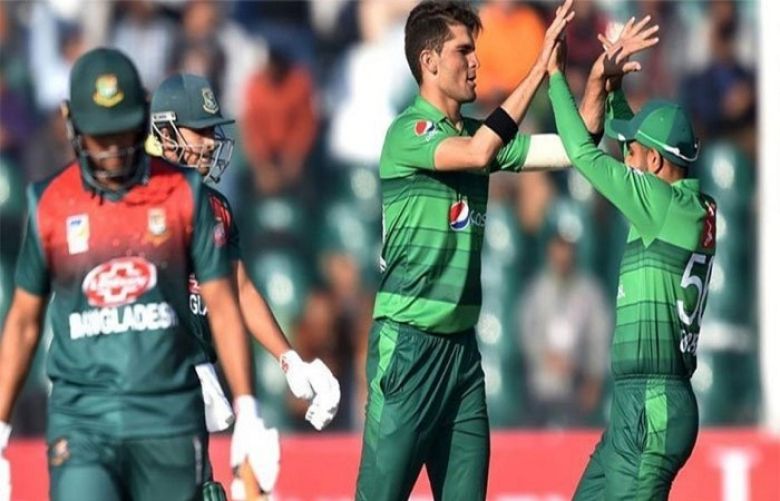 Pakistan were able to beat Bangladesh by four wickets in the first T20I of a three-match series in Dhaka on Friday, courtesy late fireworks by Khushdil Shah, Shadab Khan, and Mohammad Nawaz.

Bangladesh bowlers smashed through Pakistan's batting line up earlier as Mohammad Rizwan was dismissed for 11, skipper Babar Azam seven, and Haider Ali went back to the pavillion for a duck.

However, Fakhar Zaman took charge. He was able to hit 34 off 36 balls, with four fours.

Earlier, Bangladesh failed to impress as they managed only 127 runs at the end of their 20 overs.

A resurgent Hassan Ali was the pick of the bowlers, taking three wickets for off his four overs. He was aided by Mohammad Wasim, who took two wickets while Shadab Khan and Mohammad Nawaz chimed in with one wicket each.

Afif Hosain scored the most runs for Bangladesh, making 36 runs off 34 balls before he was stumped by wicketkeeper Mohammad Rizwan off a Shadab Khan delivery.

Bangladesh opted to bat first against Pakistan after winning the toss.

After losing the toss, the Pakistan captain said that he would have opted to bowl first had he won the toss.

The Men in Green will be looking to continue the winning momentum and clinch the series.

The two sides have clashed in 12 T20Is, Pakistan have won 10 out of the matches with Bangladesh recording both their wins at the same venue in the one-off T20I in 2015 and the 2016 Asia Cup encounter.

From the World Cup squad, Mohammad Hafeez is the only player who opted out of the team, with Iftikhar Ahmed brought on as his replacement.

Bangladesh are missing several senior players who have been ruled out due to injury or rested after a disastrous World Cup campaign, where they failed to win a single Super-12 match.

Captain Mahmudullah Riyad said his side were looking to start afresh and put the Dubai debacle behind them. "Whatever happened happened. If we think much about it that would affect us negatively. We want to think positive," he said.