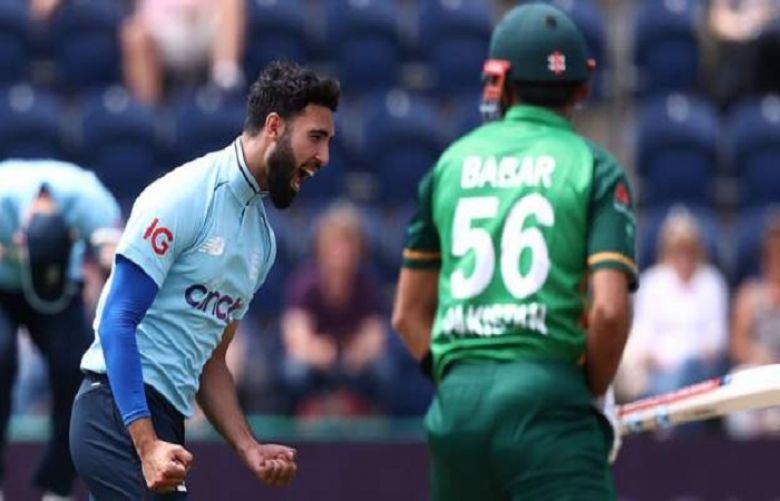 A new look England squad thrashed Pakistan by nine wickets in the first ODI at Cardiff on Thursday to take a 1-0 lead in a three-match series.

Pakistan set just 142 for victory, a completely altered England XI after a coronavirus outbreak within the originally selected squad, finished on 142-1 with more than 28 overs remaining.

Dawid Malan was 68 not out and Zak Crawley 58 not out, the pair sharing an unbroken stand of 120,

Earlier, fast bowler Saqib Mahmood took an ODI best 4-42 as Pakistan were dismissed for 141 with more than 14 overs of their innings left.

The 24-year-old Lancashire fast bowler, in just his fifth match at this level and first in nearly a year, took two wickets in three balls in the first to leave Pakistan reeling after England stand-in captain Ben Stokes won the toss.

Only opening batsman Fakhar Zaman, with 47, and Shadab Khan (30) offered much resistance in the first of this three-match series.

And when World Cup-winner Stokes caught Shaheen Shah Afridi to end the innings, Pakistan had more than 14 overs left to bat.

Such was England's command that Stokes, despite being the most experienced member of the attack, bowled just the one over.

England were fielding an entirely new XI, including five debutants, after a coronavirus outbreak within their existing squad during a recent 2-0 series win at home to Sri Lanka meant all 16 players originally selected to play against Pakistan were forced to self-isolate.

But they still made a sensational start when Mahmood had Imam-ul-Haq lbw with the first ball of the match after a review ordered by Stokes confirmed the delivery had pitched in line.

Two balls later, Mahmood had a prize wicket when Pakistan captain Babar Azam — the world's top-ranked ODI batsman — also fell for a duck after edging to Zak Crawley at second slip, with Pakistan yet to score a run.

Mohammad Rizwan had made 13 when he edged a superb, late-moving, delivery from Lewis Gregory to debutant wicketkeeper John Simpson.

And when Mahmood had Pakistan debutant Saud Shakeel lbw for five, the tourists were 26-4 from seven overs

But Zaman, on a ground where he had made a fifty in Pakistan's 2017 Champions Trophy semi-final win over England, counter-attacked.

The left-handed opener hit several fine boundaries, a four through the covers off Gregory followed by a pull off Craig Overton and a superb drive straight down the ground off debutant fast bowler Brydon Carse.

But a promising stand of 53 ended in farcical fashion when non-striker Maqsood, lured down the pitch by the advancing Zaman's call for a single, was undone when his partner suddenly stopped, with James Vince running him out for 19.

Pakistan, restricted to intra-squad rather than tour matches, badly needed the in-touch Zaman to keep going.

However, his 67-ball innings, including six fours, ended tamely when he miscued a cut off leg-spinner Matt Parkinson and gave a gentle catch to backward point.

And when Mahmood had Faheem Ashraf caught behind, Pakistan were 101-7.

Shadab, dropped on six, checked England's progress before he holed out off Craig Overton.