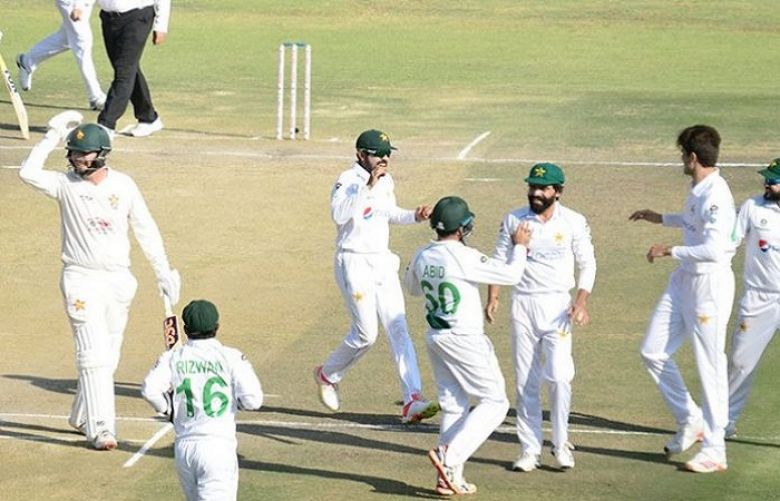 Left-arm spinner Nauman Ali bagged a fifer while pacer Shaheen Shah took four as Pakistan was one wicket away from a Test series win over Zimbabwe.

The hosts managed to score 220/9 in the second innings, trailing by 158 runs as Pakistan enforced follow-on. Luke Jongwe (31) and Blessing Muzarabani (0) were the last men standing at stumps on Day 3.

Earlier, Hasan Ali picked yet another fifer as Zimbabwe were all out for 132 in reply to Pakistan’s 510/8. It was Hasan’s best bowling figure in Test cricket as he finished with figures of 5/27.

Hasan started the Day three proceedings by dismissing Tendai Chisoro while he also had the better of Regis Chakabva(33), the most notable run-scorer for the hosts.

Hasan didn’t stop and continued his dominance as he clean bowled debutant Luke Jongwe for a score of 19.

Meanwhile, Donald Tiripano tried to held his nerves and scored a crucial 23, however, he was caught at short-leg off Sajid Khan.

The 26-year-old Hasan completed his fifth five-wicket haul of his Test career after Azhar Ali took a stunner at gully to remove Roy Kaia. Blessing Muzarabani was the last man to depart courtesy of Imran Butt’s run-out.

Off-spinner Sajid finished with figures of 2/39 while Tabish Khan and Shaheen Shah Afridi grabbed a wicket each.

Pakistan started the session with Shaheen Shah Afridi dismissing Tarisai Musakanda (8) in the fifth over. Kevin Kasuza was joined by Chakabva and the duo added 50 runs for second wickets.

Kasuza had to go after he was clean bowled by spinner Nauman Ali for 22 off 73 balls. Chakabva and Taylor batted aggressively till Tea as they scored 35 off 31 deliveries.

Zimbabwe fought well for a while, they were 142/2 with Taylor and Chakabva hitting boundaries all around, but after that stand was broken by Shaheen, they just crumbled.

Taylor dismissed after scoring quickfire 49 off 31 balls with the help of 10 fours while Chakabva was removed by Nauman Ali. Chakabva in his 137 ball innings, scored 80 and smashed 13 fours, two sixes.

Nauman and Shaheen respectively were on a brink of claiming a hat-trick, however, Zimbabweans denied it.

Nauman has the figures of 5/86 while Shaheen finished the day with figures of 4/45. Pakistan will now come tomorrow to take the remaining wickets and bag a 2-0 series win.