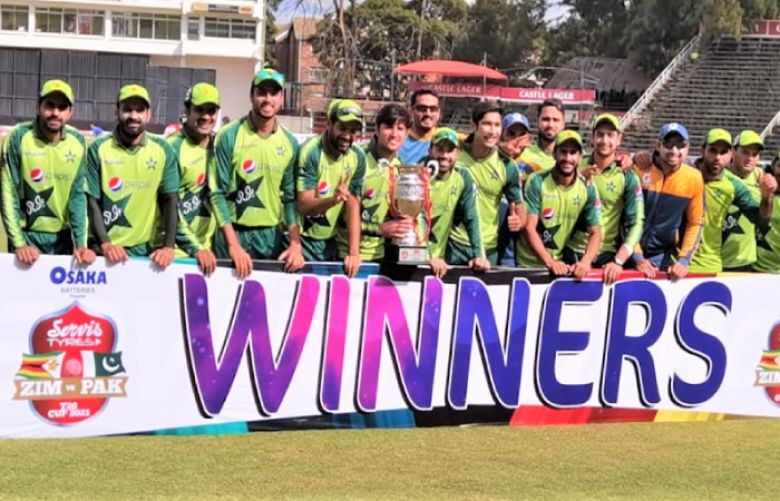 Pakistan beat Zimbabwe on Sunday by 24 runs in the final fixture of the three-match T20I series at Harare Sports Club — taking the series 2-1.

Pakistan had won the toss against Zimbabwe and had decided to bat first, as the green shirts took on the hosts in the third T20I of the series.

To help Pakistan win, Mohammad Rizwan hammered an unbeaten 91 and Hasan Ali took four wickets to lead Pakistan to a victory. Rizwan battled through the 20 overs and helped his side to 165-3 on a slow surface.

Zimbabwe replied with 141-7, falling well short of the target as Pakistan claimed a 2-1 victory in the series.

Hasan took a career-best 4-18 as he helped check Zimbabwe’s progress after the home side had made a promising start.

In-form Rizwan, whose runs came off 60 balls, featured in a 126-run second-wicket partnership with captain Babar Azam who made 52 runs off 46 balls.

Zimbabwe, who secured an upset 19-run victory in the second match on Friday, were on course for another surprise success as opener Wesley Madhevere (59) and Tadiwanashe Marumani put on 64 runs for the second wicket as the home team reached 101-1 after 13 overs, needing 65 runs off 42 balls.

When Marumani was bowled by Mohammad Hasnain for 35, however, the runs dried up and wickets tumbled regularly as Pakistan completed a comfortable victory.

The visitors got into the third T20I against Zimbabwe at the Harare Sports Club nervous and under pressure after they were handed a shocking defeat by the hosts in the last match.

At the time, Pakistan's middle order was yet again exposed when Faheem Ashraf, Asif Ali and Mohammad Hafeez put up dismal performances, resulting in a batting collapse for the team.

Luke Jongwe starred with the ball to help Zimbabwe level the series with his impressive returns of 4/18.

Pakistan captain Babar Azam has urged his middle order to step up. “The T20 World Cup is coming and we need to resolve these issues,” he said ahead of the final T20I. “Hopefully, we make a comeback. We will look to play with our best combination,” he added, hinting at some important changes.

The pitches here in Harare appear to have plenty in them for bowlers, with both captains agreeing totals around 140-150 were challenging.