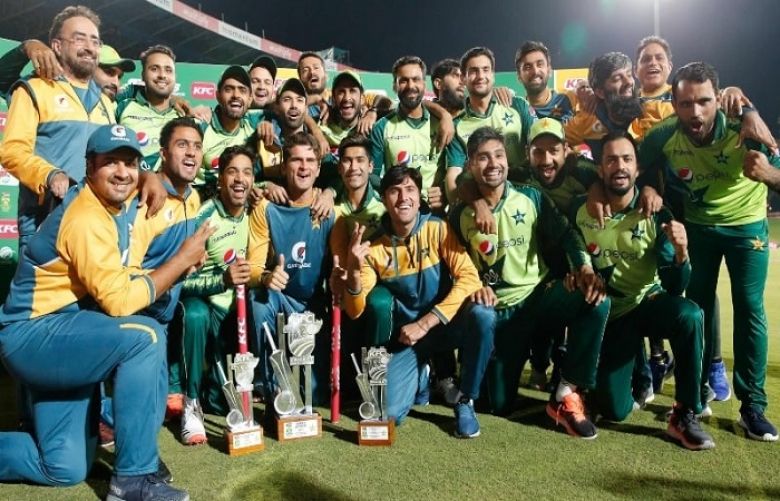 Pakistan on Friday beat South Africa by three wickets in the high stakes final fixture of the four-match T20I series at the Supersport Park in Centurion and claimed the series 3-1.

Pakistan, like South Africa, suffered a middle-order collapse as they went from 92-1 to 129-7.

However, Mohammad Nawaz kept his cool in the end and was aided by some poor bowling by the hosts, allowing the tourists to cap the tour with a 3-1 T20I series win to go with the ODI triumph earlier this month.

Earlier in the innings, Mohammad Rizwan went for a duck leaving Babar Azam, 24, and Fakhar Zaman, 60, to help Pakistan stay on track — till they suffered the middle-order collapse.

Mohammad Hafeez went for 10, Haider Ali 3, Asif Ali 5, and Faheem Ashraf was sent back to the pavilion for 7.

Nawaz scored 25 and in the end, hit a six to end the match.

The Proteas, who were put into bat after losing the toss, were bowled out for 144 on what is usually a high-scoring ground.

South Africa had reached 73 for one after the early loss of Aiden Markram when Faheem had Janneman Malan caught at mid-off for 33 in the ninth over.

Faheem followed up with the wickets of South African captain Heinrich Klaasen and George Linde. He bowled his four overs in succession and did not concede a boundary.

In the last game, Pakistan captain Babar Azam and batsman Mohammad Rizwan steered the Men in Green to victory.

Although South Africa set a massive 204-run target, Pakistan easily chased it with nine wickets to spare and took a lead of 2-1 in the four-match series.

South Africa will be hoping that in today’s game their fielding will rise to the occasion as they let the visitors off easily in the third T20I.