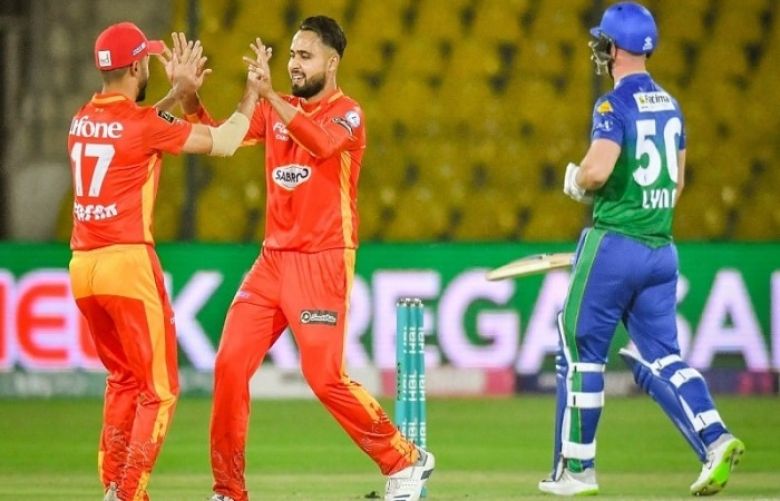 Magnificient power hitting by Lewis Gregory in the late overs helped Islamabad United win by three wickets against Multan Sultans in their opening 2021 Pakistan Super League encounter at the National Stadium in Karachi on Sunday.

Despite losing wickets in succession towards the middle of their innings, the United chased the 151-run target set by the Sultans with six balls to spare.

Alex Hales and Phil Salt began United's run chase, but before they could solidify the partnership, Salt (13) was caught by James Vince off Mohammad Umar in the 4th over.

He was replaced by Shadab Khan, who could only chip in five runs before getting caught out off Carlos Brathwaite.

Hales added a fine 29 off 20, including two fours and as many sixes, to his side's total but was bowled by Shahid Afridi in the 7th over.

More trouble followed for the United as Hussain Talat was caught off Khushdil Shah before Faheem Ashraf and Lewis Gregory attempted to save the match from slipping away.

Ashraf put up 22 runs on the scoreboard from 12 balls before he was caught by Afridi off Brathwaite in the 16th over.

But Man of the Match Gregory persevered, smashing a six and three consecutive fours in the second last over to see the United home.

Earlier, after being sent in to bat, the Sultans finished at 150-8 in their allotted 20 overs, thanks to a splendid 71-run knock by new captain Mohammad Rizwan.

Chris Lynn and Rizwan opened the innings for the Sultans, but Lynn (1 off 5) was dismissed in the second over only, caught by keeper Phil Salt off Faheem Ashraf.

Rizwan then piled on runs to build up his team's total, scoring 43 off 27 in 10 overs. The Sultans lost their second wicket in the 8th over, when James Vince (16) was caught by Ashraf on a ball by Lewis Gregory.

Rilee Rossouw helped Rizwan with a 25-run knock off 14 laced with two fours and as many sixes, before he was caught by Mohammad Waseem off Shadab Khan.

Waseem struck again in the next over, sending Sohaib Maqsood packing after scoring two runs. Khushdil Khan (7), meanwhile, was caught by Alex Hales off Gregory in the 14th over.

A breakthrough came for the United in the 19th over when Waseem bowled out Rizwan, who scored his 71 from 53 balls.

The unstoppable Waseem also dismissed Shahid Afridi in the very next ball for a golden duck.

Earlier, Islamabad United won the toss and decided to field first against the Sultans.

"Lots of dew on the surface, and we'd like to restrict them to around 140," United captain Shadab Khan said, according to ESPNCricinfo.

"We try and play our best XI according to the pitch and we'll try and make the most of these conditions," Sultans' new skipper Mohammad Rizwan said.

This was the second PSL match of the day. In the first match, Lahore Qalandars beat Peshawar Zalmi by four wickets.