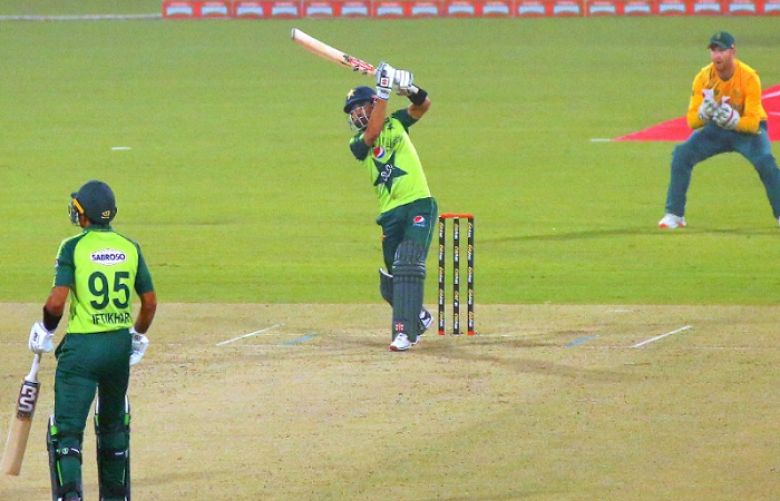 Mohammad Rizwan's splendid 104-run knock propelled Pakistan to victory in the first Twenty20 International against South Africa at the Gaddafi Stadium in Lahore on Thursday.

It was Rizwan's highest-ever score in a T20I match and helped Pakistan set a respectable target for the visitors after the hosts suffered a loss early on when captain Babar Azam was run out in the very first over.

Earlier, South Africa won the toss and elected to field first against the hosts.

Pakistan suffered an early loss when their talisman Babar Azam was run out by Bjorn Fortuin on the second ball of the match for a duck.

The hosts struggled to find their footing, losing Haider Ali at the start of the sixth over when he was caught out by Jacques Snyman off Andile Phehlukwayo's ball. Haider was replaced by Hussain Talat at the pitch who tried to swiftly pick up runs, hitting two consecutive fours and scoring 15 runs off nine balls.

He lost his wicket in the 10th over, leaving Pakistan struggling to build momentum.

Mohammad Rizwan brought much-needed stability for the hosts, hitting three sixes in one over to complete his half-century, his second in T20Is.

Pakistan lost their fourth wicket in the 13th over as South Africa continued their flawless fielding as Iftikhar Ahmed was caught out by Reeza Hendricks off Fortuin's ball.

Khushdil Shah, who replaced Iftikhar, played it safe before hitting a huge six in the 17th over.

He tried to hit another boundary on the next ball but was caught out by Fortuin instead.

Faheem Ashraf was caught out by Miller on Phehlukwayo's ball in the 18th over.

South Africa were off to a solid start, having managed to score 44 runs with zero loss of wickets at the end of five overs.

Haris Rauf's over proved to be the most expensive for the hosts as the Proteas scored 18 runs off the six balls.

Leg-spinner Usman Qadir took the first wicket for Pakistan as he bowled out Janneman Malan in the seventh over.

He took Jacques Snyman's wicket too in the ninth over with a brilliantly bowled googly. Faheem Ashraf took the third wicket for Pakistan when David Miller was caught out by wicketkeeper Mohammad Rizwan.

However, Faheem's luck ran out in the next over he bowled with South African batsmen hitting three consecutive boundaries.

The Proteas lost their fourth wicket when captain Heinrich Klaasen was caught out by Hussain Talat on Rauf's ball. Reeza Hendricks was run out in the 18th over when he misjudged and ran out of his crease while Andile Phehlukwayo stayed out.

The visitors lost their next wicket in the same over as Phehlukwayo was caught out.

Pakistan entered the game after sweeping a two-match Test series 2-0 against the Proteas and look to be the favourites in the three-match T20 series.

In the lead-up to the ongoing home series against South Africa, the Pakistan team and its management faced a lot of criticism after disastrous off-shore series results in Australia (November 2019), England (August 2020) and recently in New Zealand (Dec-Jan 2020-21). At one stage the jobs of head coach Misbahul Haq and bowling coach Waqar Younis were at stake. However, the home Test series victory against South Africa has come as a breath of fresh air for the PCB, the team and its management.

South Africa hold a slight edge over Pakistan in their head-to-head T20 record. The former have won eight games out of 14 while the Green Shirts came out victorious in six. Pakistan lost the three-match series 2-1 when they last faced the Proteas in a T20 rubber staged in their backyard in February 2019.

The second and third T20 matches of the series will be staged on Saturday and Sunday, also at Gaddafi Stadium.