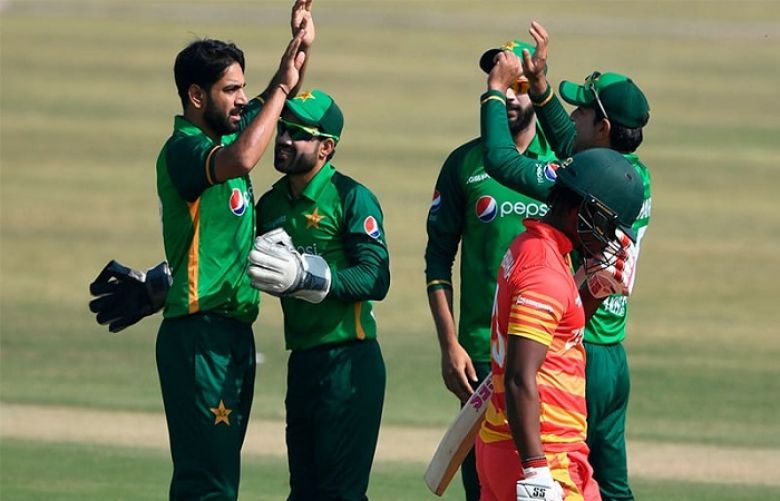 Pakistan recorded their second consecutive victory over Zimbabwe, defeating them by six wickets in the second One-day International here at the Rawalpindi Cricket Stadium on Sunday.

Chasing a moderate target of 207, Pakistan completed their second successive win in 35.1 overs when skipper Babar Azam finished it off in style with a towering six over long-off .

He struck an unbeaten 77 from 74 balls with seven fours and two sixes.

Opener Imam-ul-Haq made 49 and along with his partner Abid Ali (22) provided a solid start of 68 runs.

Mohammad Rizwan could score only one run while Iftikhar Ahmed, giving a good support to Babar, made 16 and remained not out.

Earlier, Zimbabwe were restricted to 206 due to Pakistani allrounder Iftikhar Ahmed's excellent bowling performance in the second One-day International being played here at the Rawalpindi Cricket Stadium on Sunday.

Zimbabwe chose to bat first after captain Chamu Chibhabha won the toss but they were bowled out for 206 in 45.1 overs.

Iftikhar displayed his career best bowling performance with five for 40 in the 10-over quota in his sixth ODI match.

He is a regular middle-order batsman who also plays as an off-break bowler.

For Zimbabwe, Sean Williams top scored with 75 and his 70-ball innings was laced with ten fours and a six.

Branden Taylor, the centurion of the first ODI, could make 36 and opener Brian Chari made 25 as no other batsman could get any significant runs.

Pakistan had won the first match by 26 runs at the same venue on Friday and have now brought in 20-year-old pair Haider Ali and Musa Khan for their ODI debuts. The former replaced Haris Sohail who pulled a left leg muscle in the first match while the latter takes place of Wahab Riaz, who is rested due to a niggle.

Zimbabwe kept the same line-up as the first match, resisting the temptation of bringing in the experienced batsman Elton Chigumbura.

The final match in the three-game series at the same venue on Tuesday.

Aleem already holds the records for officiating in the most Test matches (132) and the most international matches (387) of any umpire.