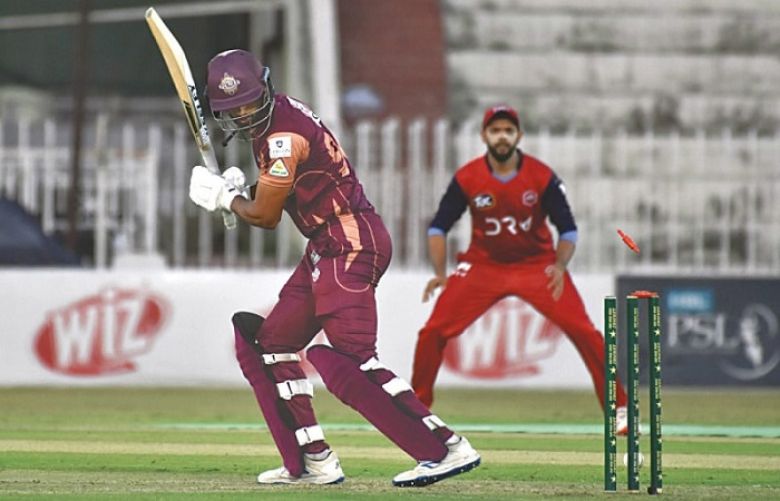 Inspired by a fiery burst from Haris Rauf, defending champions Northern made certain of their semi-final qualification in the National T20 Cup after thwarting Southern Punjab’s late resurgence to clinch a narrow five-run victory in Rawalpindi on Sunday.

After being restricted to a below par 145-7 at the Pindi Cricket Stadium, Northern fast bowler Haris wrecked the top-order batting of Southern Punjab with two wickets upfront and added another two to finish with 4-24 from four hostile overs and the man-of-the-match award.

Umar Siddique fell to the very first ball of Haris’ opening over before captain Shan Masood was cleaned up for four. Haris then saw the back of Hussain Talat (12). Southern Punjab lost the plot with the run out of Khushdil Shah — their hero against Sindh on Friday with that record-breaking century against Sindh on Friday night — for a 20-ball 26 (two sixes) as they slumped to 75-5 in the 14th over.

All-rounder Aamir Yamin kept his side in the hunt until the very end but he was left frustrated as Northern continued to pick up wickets at the death as Southern Punjab finished at 140-8. Aamir — one of only two batsmen to cross in the entire game — was stranded on a quickfire 33 with his 19-ball cameo featuring two sixes and three boundaries.

Imad Wasim also had good match as the skipper first remained undefeated with an 18-ball 26 (three boundaries) before chipping in with the scalps of Sohaib Maqsood (19) and Mohammad Ilyas (9).

Earlier in the afternoon, Imad’s charges found the going rather pedestrian after the captain chose to bat first at the toss. At the halfway stage the champions had only collected 57 runs for the loss of three wickets.

Sohail Akhtar, however, stood out to hit up 35 — the highest individual score of the match — with the help of five boundaries from 32 deliveries, while Asif Ali banged a brace of sixes in making an 18-ball 28.

With six victories under their belt from seven outings, Northern have open a four-point lead at the top.

Youngsters Danish Aziz and Hassaan Khan, meanwhile, resurrected Sindh’s campaign in the competition with crucial contributions in the tense three-wicket victory against the Babar Azam-led Central Punjab side late on Saturday night.

Babar, the star Pakistan batsman and limited-overs captain, replicated his score of 86 versus Northern on Friday but despite his heroics, Central Punjab managed an inadequate 170-6 after opting to bat. Babar’s 56-ball innings contained nine fours and three sixes before the excellent Sohail Khan picked up his prized scalp.

Central Punjab suffered a big setback when Abdullah Shafiq (16) and Faheem Ashraf — who was run out by a fine throw from Hassaan — fell with the score on 88 after the former had helped Babar put on 86 for the second wicket.

Sohail bowled exceedingly well to grab three wickets for 24 runs but he was beaten to the man-of-the-match prize by Danish who produced a wonderful innings under pressure to score 59 not out from 32 balls. The 24-year-old left-hander’s second T20 half-century — and his highest score — was laced with five fours and three sixes.

Hassaan, who celebrates his 22nd birthday on Friday, also notched up his best score in T20 appearances as the right-handed batsman — who bowls slow left-armers — supported Danish in a game-changing partnership of 57 after coming in at 97-5 in the 13th over, while striking four sixes and two fours in a belligerent 33 off just 15 deliveries.