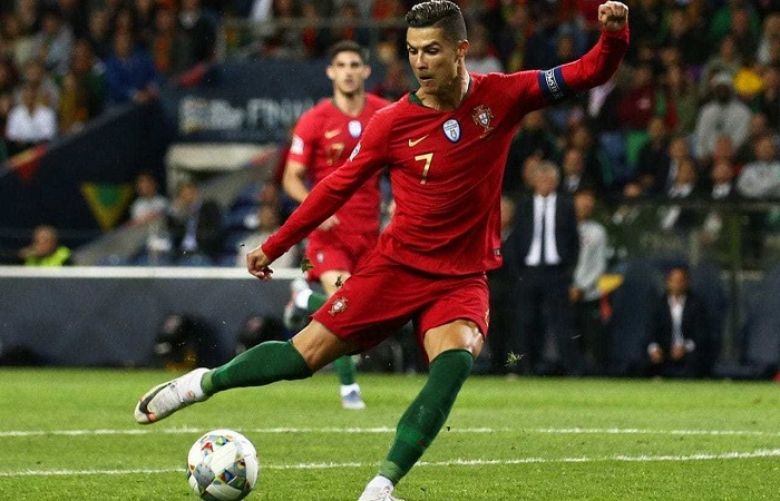 The 35-year-old Ronaldo become just the second male player to reach a century of goals for a national team when he curled a free kick into the top corner from 25 metres for the first of his two strikes in Portugal’s 2-0 away win against Sweden in the Nations League on Tuesday.

Scoring one of the best goals of his international career was a fitting way to enter the “100 Club,” where he joins former Iran striker Ali Daei, and he wheeled away in delight in an empty Friends Arena in Stockholm before performing his trademark celebration — the mid-air pirouette.

Ronaldo, who was playing in his 165th game for Portugal, then added a second goal — another curler into the top corner — and needs nine more to surpass the international record of 109 scored by Daei from 1993-2006. The five-time world player of the year already holds the record for goals in the Champions League with 131 — 16 more than nearest rival Lionel Messi — and has now scored an international goal for the 17th straight calendar year.

“They are two important goals because it means I managed to reach this mark I’d been seeking,” Ronaldo told Portuguese public television RTP.

“I’m very happy, first because the team won and of course to score the 100th and then the 101st, two great goals.”

Portugal have won its two opening group games after beating Croatia 4-1 on Saturday, when Ronaldo was absent because of a toe infection.

England drew 0-0 at Denmark in Copenhagen.

At the Stade de France, Eduardo Camavinga became France’s youngest international in 106 years as Les Bleus won a repeat of the 2018 World Cup final over Croatia.

Midfielder Camavinga, aged 17 years and nine months, replaced N’Golo Kante in the second half and is only surpassed by Julien Verbrugghe, aged 16 years and 10 months in 1906, and Maurice Gastiger, at 17 years and 4 months in 1914.

Deschamps made seven changes from Saturday’s win over Sweden in Solna with Wissam Ben Yedder and Anthony Martial leading the attack after Kylian Mbappe contracted Covid-19.

Antoine Griezmann, Dayot Upamecano, Olivier Giroud as well as an own goal from the visitors’ goalkeeper Dominik Livakovic secured a repeat result from Russia two years ago after Dejan Lovren had opened the scoring for Croatia, Wolfsburg’s Josip Brekalo adding their second in the 55th minute.

Kevin De Bruyne celebrated becoming English football’s player of the year by setting up two of Belgium’s goals in their comeback win over Iceland to follow up on their 2-0 win over Denmark.

The Islanders opened the scoring through an 11th-minute deflected shot from Holmbert Fridjonsson.

But a reshuffled Red Devils outfit hit back almost immediately through Axel Witsel in the 13th minute, before a Michy Batshuayi double (17, 70) coupled with goals from Dries Mertens (50) and new cap Jeremy Doku (80) combined to put the game out of sight.

Belgium’s win moves them to the top of League A Group 2 ahead of their trip next month to England, who were lucky to escape with a 0-0 draw away to Denmark in Copenhagen on Tuesday.

A difficult few days for England coach Gareth Southgate ended with his team being held to a tame draw against Denmark, though Harry Kane came close to snatching victory when his late shot was cleared off the line.

England were without highly rated youngsters Mason Greenwood and Phil Foden, who were sent home for breaching coronavirus rules in Reykjavik after making their international debuts in the 1-0 win over Iceland on Saturday. Video posted on social media video appeared to show the players meeting women from outside the team bubble.