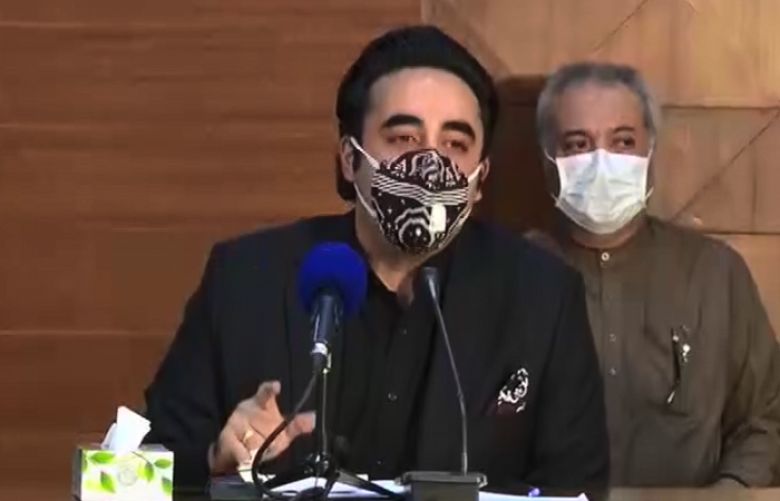 PPP chairperson Bilawal Bhutto said Monday Prime Minister Imran Khan was a “danger" to democracy, economy, and the nation as he slammed the PTI’s foreign policy on Kashmir.

Addressing a press conference flanked by PPP leaders in the metropolis, he said: “Imran Khan is the first and the last prime minister who failed to unite the nation on the Kashmir cause.”

Every government in the past — dictatorship, democratic, selected, or elected — was able to unite the people on the cause of Kashmir, he said, adding: “I am surprised that despite all these problems, prime minister, on the floor of the house, said that PTI’s foreign policy has been the most successful.”

“I am the only politician from opposition and treasury benches to oppose Modi. Unlike the appeasement policy that either of the ruling parties has had with Modi, PPP has always maintained its stance and has opposed him from day one and will do so in the future,” Bilawal said.

“But this incompetent prime minister has failed to form national unity on Kashmir cause, he is the prime minister who ran Modi’s election campaign claiming that if Modi wins, the Kashmir issue would be resolved,” he said.

The government’s appeasement policy with Modi must come to an end, Bilawal said, adding that the PTI-led government’s foreign policy has damaged Pakistan.

PPP has always been at the forefront of the Kashmir issue. Zulfiqar Ali Bhutto had fought the case of Kashmir and today Pakistanis and Kashmiris remember his speeches in the United Nations.

He urged the government to give relief to the frontline workers, labourers, farmers, and those affected by the coronavirus.

Bilawal claimed that the Sindh government, despite all the hurdles and adversities, presented a people-friendly budget.

"Due to the federal government’s incompetency, we are facing a shortfall of Rs229 billion during a global pandemic, Punjab is receiving Rs470-80 billion less, and other provinces are facing the same treatment at a time when the Centre should have supported the provinces," he said.

"For the first time since the creation of Pakistan, the country has seen negative growth," he lamented.

Highlighting the Sindh government’s budget and what was in it for the people, he said that the province would provide loans to the businesses affected by the pandemic

To support the agriculture sector, Sindh will give subsidy in seeds, fertilizers, and pesticides to the small farmers whose land is smaller than 25 acres in a bid to enhance their yield, he said.

In the areas where water is scarce, the agricultural department is providing subsidy in drip irrigation and tube wells," he said.

In urban centres, loans have been arranged for businesses, while the province is aiming to provide a package to the families whose bread earners have succumbed to coronavirus.

For the women farmers, the Sindh government is providing community-based loans and soft loans.

Reacting to the criticism Sindh has been facing for its response towards coronavirus, Bilawal said that the province had the highest testing capacity per capita, free of cost treatment for patients, and free tests for the virus were being conducted in the province.

“Our Intensive Care Units (ICU) and High Dependency Units (HDU) are more than any province. The [Centre] celebrated 100 days of battling coronavirus in the National Command and Control Centre, while Sindh inaugurated a 50-bedded hospital,” he said.

The PPP chairperson said that the PTI-led government’s in the Centre and the provinces were decreasing the number of tests, intentionally. “They are pushing Pakistanis towards danger.”

“Sindh is committed and we will increase our testing even if others decrease it. By lowering the testing capacity they are putting our frontline workers in danger as the nurses and paramedics won’t know who is infected and who isn’t,” he said.

"If you stop testing, then the graph will go down. But the same number of people will fall ill and die," Bilawal said.

“If you are conducting fewer tests then it means that the contact tracing is also not being conducted and the doctors and nurses are also not being tested,” he said, adding: “This incompetent government is compromising on a fundamental concept that the whole world has been telling us — testing.”

Bilawal demanded that a risk allowance similar to that of Sindh be provided to frontline workers across the country. "PTI has left Pakistanis orphaned on all platforms, including economy, foreign policy, and now on public health."

"We have to tackle a global pandemic, a dangerous attack of locusts after 70 years, global economic recession — which has been further worsened due to selected — and with all this, we have to face political engineering. We are ready to fight these battles on every forum," he said.

Bilawal urged the media to do unbiased reporting on PTI's corruption narrative as the incumbent government was the most corrupt. "You can't spell corruption without the words PTI."

He highlighted that Transparency International had termed Imran Khan's government the "most corrupt" in Pakistan's history.

"Their own auditor general's report mentions there that there have been irregularities worth Rs270 billion [...] Musharraf's first amnesty scheme was for Imran Khan."