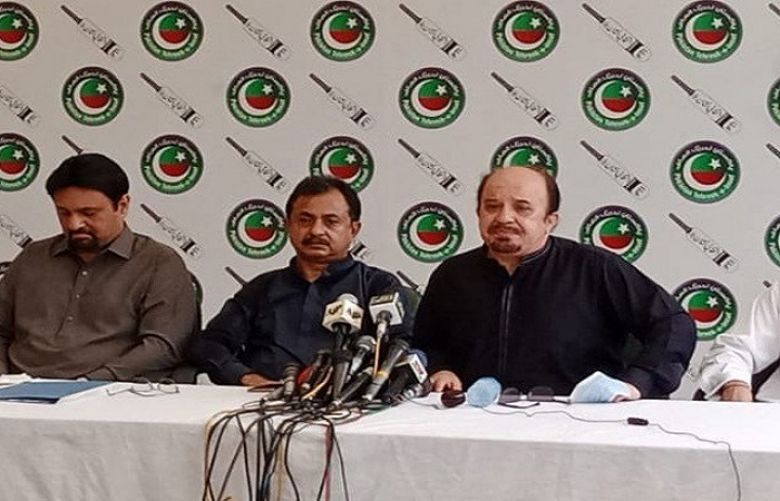 As tensions continue to flare between the Pakistan Tehreek-e-Insaaf (PTI) and Pakistan Peoples Party (PPP), the former on Sunday announced it would take the Sindh government to the National Accountability Bureau (NAB), alleging that it was involved in corruption.

The announcement was made by Opposition Leader in the Sindh Assembly, Firdous Shamim Naqvi alongside PTI leader Haleem Adil Sheikh, slamming Chief Minister Murad Ali Shah, saying that he does not appear before NAB when summoned.

Naqvi further alleged that whatever work was carried out by the Sindh government was done after paying 52% bribes, adding that the ruling party in Sindh would “not give anything” to Karachi but will “loot” it.

“We will also register a complaint in NAB,” Naqvi said, while Sheikh added that whenever any investigative body summons then one should go.

“We have seen that many people go to NAB with a stick but jog when they come to the assembly,” Sheikh said, taking a dig at the PPP leadership and alleging that they make illnesses an excuse when summoned by NAB.

The PTI leader, while speaking about NAB’s announcement to investigate a charge of illegally selling government land, said the anti-corruption watchdog is yet to summon him.

Sheikh stated that thousands of acres of land in Karachi and its adjoining areas were given on lease, adding that during the PPP’s tenure money was asked for it and he refused to give.

“We told them to take from us whatever the government fees is,” he said. Sheikh further alleged that the provincial government let the Anti-Corruption Establishment of Sindh on him after the PTI took out a rally against the Omni group.

The PTI leader further said that an FIR could not have been filed against him in the anti-corruption establishment or else there would have been one.

“Whenever NAB calls we will go,” he said, adding that NAB had launched a probe against him on the orders of the Anti-Corruption Establishment.

NAB on Saturday said it had initiated a probe against Sheikh for allegedly selling government land illegally.

The bureau, in its letter to the deputy commissioner Malir, has requested for all records pertaining to the sale of 253 acres of government land along with details of his farmhouse and other documents.

“In connection with a complaint being processed in this Bureau, it is revealed that 253 acres of government land situation in District Malir Karachi has been illegally occupied/sold by Haleem Adil Sheikh and others in connivance with the officers/ officials of Board of Revenue District Malir Karachi," the letter said, adding, ACE, East Zone Karachi also conducted an inquiry into the matter.

The letter further said an anti-corruption unit has already completed an inquiry against the PTI leader which the Bureau has also requested. DC Malir has been directed to submit the records by July 27.

Earlier, reports of Sheikh being involved in a land scam had emerged. The PTI leader was said to have illegally allotted 207 acres of state land, worth Rs410 million.

The report by local media had also cited that the lawmaker was involved in the illegal allotment of land through fraud as well.