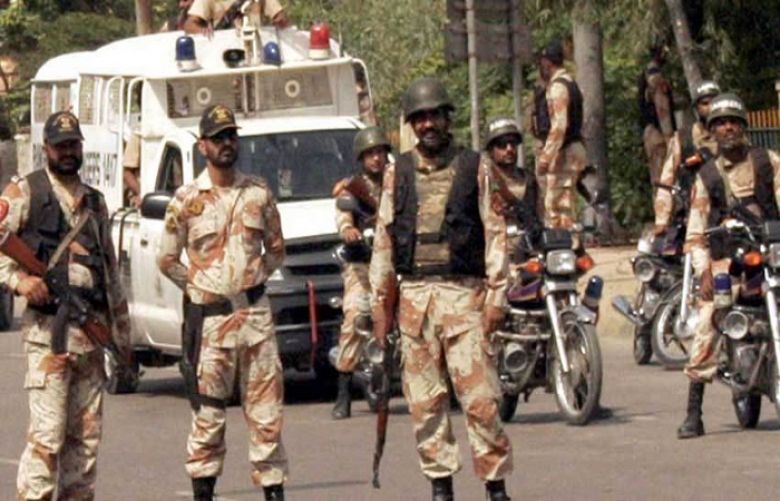 Counter Terrorism Department (CTD) has registered the case of attack on a Rangers vehicle in Ghotki yesterday.

CTD police station Sukkur has filed FIR against unknown terrorists, on the complaint of a rangers official, under the anti-terrorism law.

At least three people including two Sindh Rangers personnel were killed on Friday in a blast targeting a Rangers vehicle in Ghotki.

The police has recorded statements of the officials of rangers.

According to the local police, the vehicle of Sindh Rangers was targeted with crackers at Railway Station road in the area of Ghotta Market.

Two personnel of rangers and a civilian were killed in the attack, police said.

A total of five attacks have been made against Pakistan Rangers Sindh during the past nine days with three consecutive attacks in various cities of Sindh on Friday (yesterday).

The first attack occurred on June 10 in Gulistan-e-Jauhar area of Karachi, which targeted a rangers vehicle while another attack on the same day targeted a Rangers checkpost in the Manzil Pump area.

Rangers personnel were made target yesterday in Karachi, Larkana and Ghotki.

Bomb disposal squad investigating the attack that occurred in Liaquatabad in Karachi has claimed that the explosive was a factory-made RGD grenade.

The bomb disposal squad has found and confiscated pieces of the grenade and its pin from the crime scene.

The trigger and lever of the bomb have also been found and confiscated.

The hand grenade pin was found on a bridge above the point of explosion which happened to be a college wall which had a rangers vehicle parked next to it.