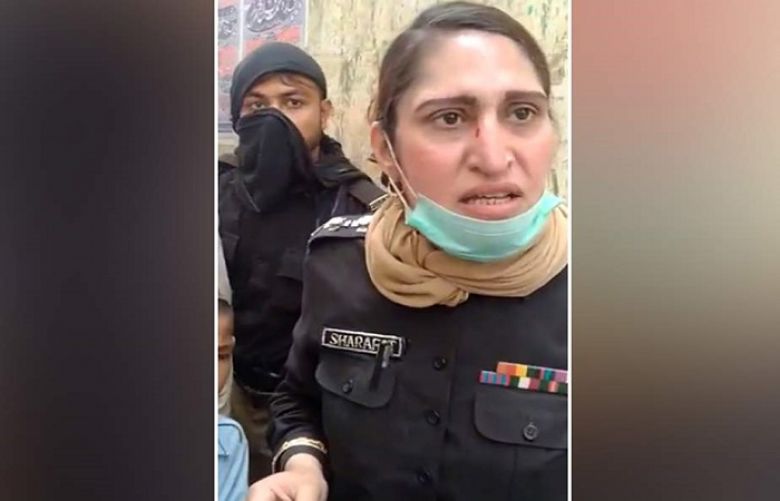 SHO Sharafat Khan was injured after being pelted with stones when police tried to stop a large number of people from offering Friday prayers at a mosque in the city.

A video doing the rounds on social media features the Peerabad SHO, a woman police officer, who can be seen shouting at a large crowd of men exiting a mosque. "Record their video. They attacked me. They broke my glasses as well," she can be seen shouting.

The incident took place in Peerabad, Orangi Town when police came under attack after attempting to stop a large number of people from offering prayers in a mosque over violation of Section 144. The police contingent came under attack when they were pelted with stones.

The situation was brought under control when an additional contingent of police and Rangers personnel arrived at the scene. SSP South spoke to Geo News and said that action will be taken against those who attacked the police contingent.

Police have registered a case against the mosque's management and unidentified persons for violating Section 144 and rioting. So far, no arrests have been made in connection to the case.

As the number of coronavirus cases continue to rise throughout Pakistan, the Sindh government has banned more than five persons [Imam, Muazzin and other management] from offering prayers in a mosque.

A complete ban on the movement of people and activities from 12:00pm to 3:30pm for Fridays only has also been imposed by the provincial government in order to ensure that people do not assemble in mosques and spread the infection.

The Pakistan Ulema Council has urged the public to offer prayers inside their homes and heed the warnings as well as safety precautions being issued by the government.

While the number of coronavirus cases in Pakistan increased to over 4,700 on Friday, the worldwide number of officially confirmed cases of the virus now stands at 1.5 million.

More than 90,000 people have died and positive cases have been reported in 213 countries and territories since the epidemic first emerged in China in December. Of these cases, at least 253,000 are now considered recovered.