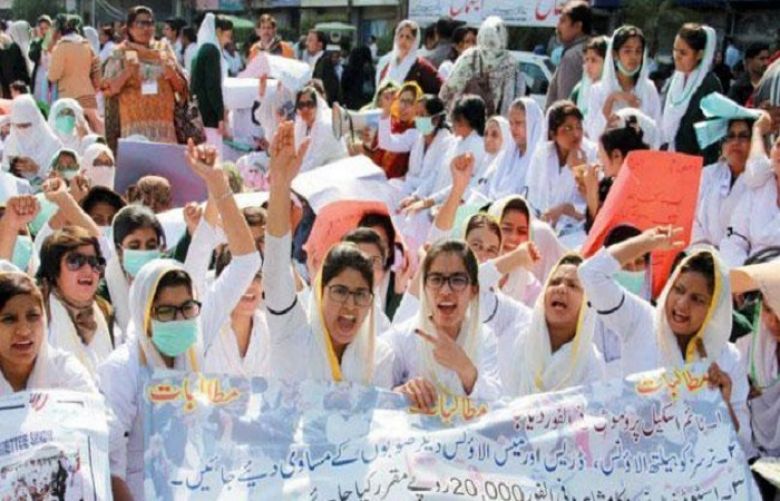 The police arrested several nursing staff when they tried to march towards the Governor House, following the failure of the talks with the Additional Secretary Health Sindh, on Wednesday.

The nurses, who are on hunger strike from seven days, have started moving towards Governor House, who were stopped by the policemen.

The police arrested several protesting nursing staff and shifted them to the jail.

The patients in Jinnah Hospital, National Institute for Child Health (NICH) are facing problems due to the ongoing strike of the nursing staff.

The protesting nurses’ leaders maintained that the Sindh government did not meet their demands despite signing a written agreement with the alliance.

The nurses have been demanding that provincial authorities comply with the service structure, promote nursing staff to next grades and provide professional health and teaching allowances.

They have appealed the provincial authorities to comprehensively review the problems faced by the nurses and resolve their problems as per the agreement signed with the alliance. They also entreated Pakistan People’s Party (PPP) Chairman Bilawal Bhutto Zardari to take notice of the situation and advise the Sindh government in this regard.

On the other hand, Sindh’s Health Department has said the demands of the protesting nurses have already been met, while consultation underway on promotion to next grade.