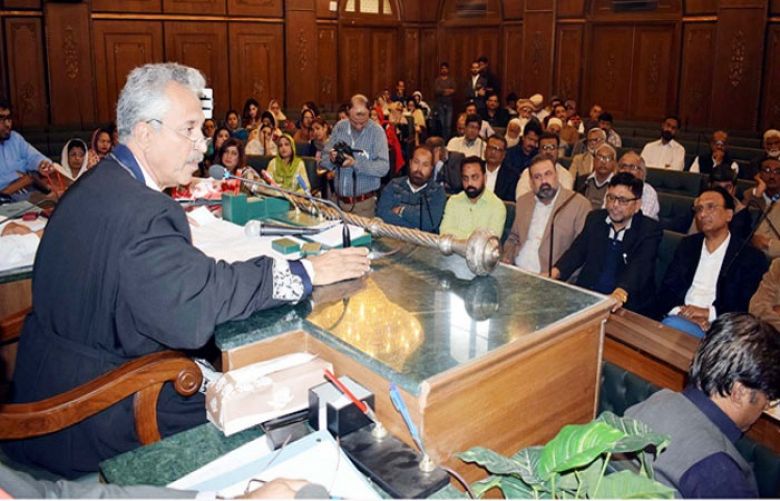 The polling began at 9am and will continue till 5pm without any break. Deputy Commissioner (South) Syed Salahuddin has been named returning officer to supervise the election.

The office of deputy mayor fell vacant after the Election Commission of Pakistan declared Arshad Vohra as disqualified last month.

The polling to the deputy mayor’s slot is being held at the City Council hall of the Karachi Metropolitan Corporation’s old building.

The Muttahida Qaumi Movement-Pakistan’s (MQM-P) Syed Arshad Hussain and Pakistan People’s Party’s (PPP) Karamullah Waqasi are in the run for the slot.

The work will remain suspended at the KMC office on the polling day.

The Election Commission of Pakistan (ECP) had disqualified Arshad Vohra as deputy mayor of Karachi in March.

The decision came on a petition filed by the Muttahida Qaumi Movement-Pakistan (MQM-P) seeking to de-seat Vohra for switching loyalty to the Mustafa Kamal-led party.

Vohra was elected as chairman of Union Council-49 of Karachi’s central district in the local council elections.

The then MQM-P convener Farooq Sattar had gone to the electoral body seeking disqualification of Vohra under the Local Government Act 2013.

He contended that Vohra elected as deputy mayor on MQM-P ticket and he did not relinquish his office after changing loyalty to PSP, which is sheer violation of the constitutional laws. He pleaded the ECP to issue a notification of Vohra’s disqualification.