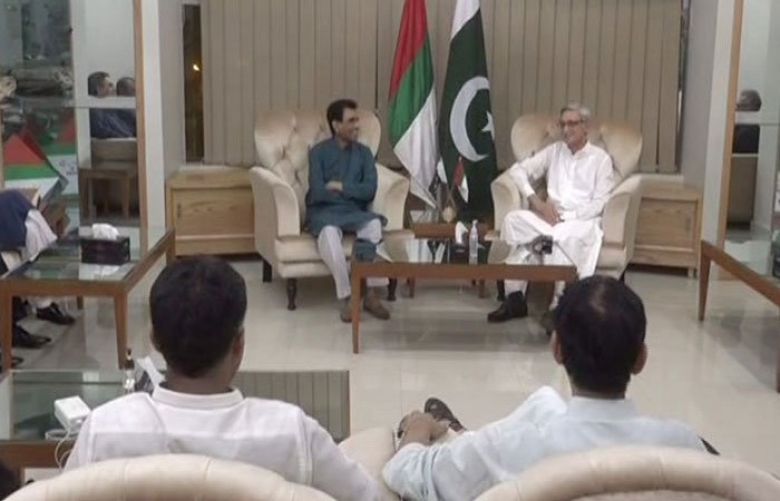 A PTI delegation led by Jahangir Tareen met with the leadership of Muttahida Qaumi Movement-Pakistan on Monday night to seek their support for government formation in the centre.

In a press conference held after the meeting, Tareen said that he had a positive meeting with the MQM leadership and has invited the party to join federal government, adding that the people of Karachi gave a joint mandate to the PTI and Siddiqui's party.

"To move forward we have to think of the masses. Its in the manifesto of PTI to resolve basic issues of the metropolis," he said. "We will resolve water, transport, infrastructural issues of the city."

Siddiqui said that the party found similar views on many of the issues with the PTI leader.

"Its a pleasant surprise for us that we have commonalities. We have an agreement over strong and independent local bodies system," he said. Siddiqui said that both the parties will help each other to address the reservations over the election results.

"We spoke on re-counting and census in our meeting. Imran Khan has already said that he would address the reservations of people on election results."

Siddiqui said that the bitter past between the two parties can change into co-operation in future.

During the meeting, MQM-P put forward its demands before the PTI leaders to get its six-member support in the lower house.

The MQM-P has conditioned its support on the acceptance of their demands.

Earlier on Monday, Pakistan Muslim League-Nawaz leader and former Sindh governor Mohammad Zubair met with the leadership of MQM-Pakistan at its Bahadurabad.

Speaking to the media after the meeting, Zubair remarked that the two parties will continue to stay in the touch in the coming few weeks, adding that MQM-Pakistan also has reservations regarding the way elections were conducted.

Regarding the meeting, he shared that the representatives of the two parties discussed the conditions in Sindh especially Karachi alongside the political situation which has emerged following the General Election 2018.

Moreover, MQM-Pakistan leader Faisal Sabzwari alleged that the Election Commission of Pakistan was involved in the rigging the elections for the first time. "The failure of the result transmission system shows that ECP was unsuccessful in its task."

The returning officers must recount votes as per the law, he claimed.

"People whose own party wouldn’t vote for them won. How is this possible," Sabzwari asked.

With regards to Form 45, he questioned where was it filled? "Who knows where it was filled as the polling agents weren’t present at the time votes were being counted."

Form 45 was supposed to be submitted on the day of the election rather than being uploaded on the website after a week, he said.