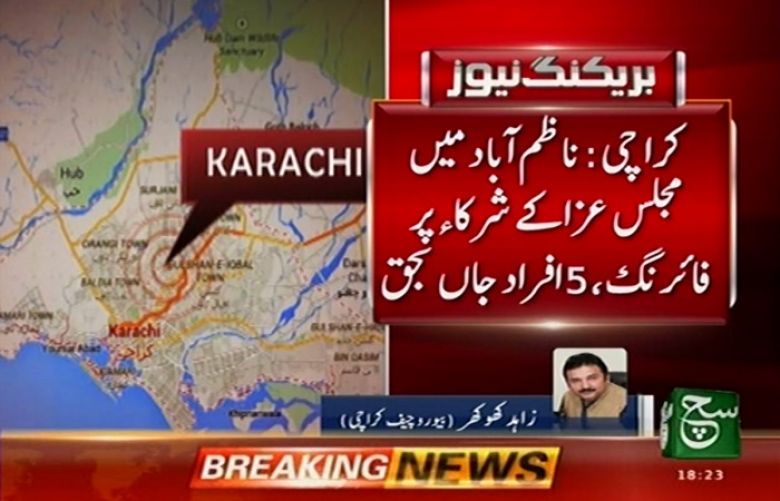 ive family members were reportedly killed on Saturday and many others injured when unidentified assailants opened fire at a religious gathering in Karachi's Nazimabad area.

The dead and injured were taken to nearby Abbasi Shaheed Hospital.

"Four men were brought dead to the hospital while a woman was brought with fatal injuries," said Dr Rohina Hassan, the additional police surgeon at Abbasi Shaheed Hospital. The woman later succumbed to her injuries during treatment.

According to details, the attackers entered the camp set up for majlis outside the residence of a police official and opened fire at the participants.

The majlis was being held in a street adjacent to the police station in Nazimabad no. 4 area beside Larosh restaurant.

Some eyewitnesses informed that no police official was deployed for the security of the majlis.

Sindh Police Chief AD Khawaja, however, said that, “Organisers did not inform the police about the majlis”.

Meanwhile, the deceased include four brothers.

Sindh Chief Minister Murad Ali Shah took notice of the firing incident at majlis in Nazimabad area of the metropolis.

He called Sindh Inspector General and asked him to set up blockades to arrest the culprits involved in the incident.

Earlier this month, a boy was killed and 15 other people, including women and children, were reportedly injured when an explosion occurred outside Dar-i-Abbas Imambargah in Karachi's Liaquatabad area.