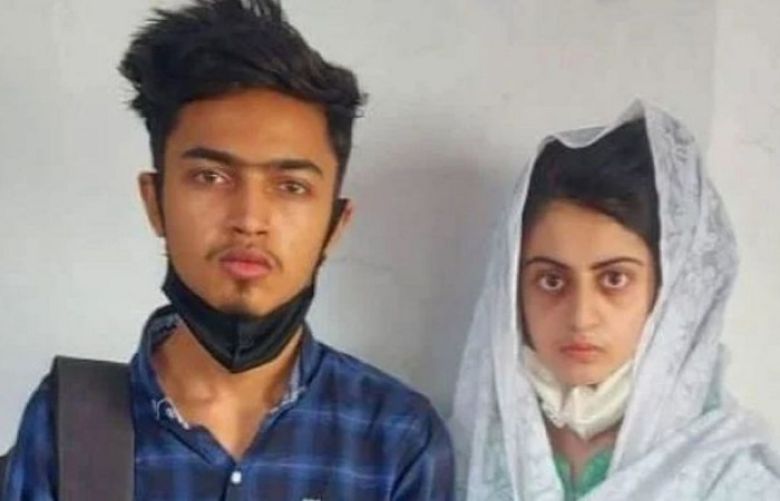 A Karachi court on Wednesday sent teenager Dua Zehra — the girl who was reported missing from Karachi on April 16 and later recovered from Punjab on June 5 — to a government-run child protection and shelter home.

The order was issued during the hearing of a case pertaining to her alleged kidnapping from Karachi and transfer to Punjab, where her underage marriage was illegally solemnised.

Judicial Magistrate (East) Aftab Ahmed Bughio issued the order on an application moved by her purported husband, Zaheer Ahmed, seeking direction for the child protection officer to produce Dua in the court.

On July 24, Karachi police had brought Dua back from the Darul Aman, Lahore, where she had taken shelter following the ongoing legal battle between Zaheer and her parents regarding the legality of their alleged marriage.

At the outset of Wednesday’s hearing, investigating officer DSP Saeed Rind produced Dua before the court.

At the time of her appearance in the courtroom, the magistrate only allowed the counsel representing the parties to stay inside the courtroom.

He clarified to the parties that “at this juncture the purpose of the production of the minor/victim is to safeguard her rights till the commencement of the trial and decide a better place for her temporary stay”.

The magistrate inquired the accompanying officer about “the environment under which the victim was kept”.

A counsel representing her purported husband said Dua wanted to get her statement recorded.

However, the magistrate did not entertain the request, saying that the teenager was not produced for the purpose of recording her statement, but the purpose was just to ensure the protection of her rights, including security.

He inquired from the counsel representing the parties as to whether they were satisfied if the custody was entrusted to the Shelter Home for the Destitute and Orphan Children Social Welfare.

Both the parties showed no reservations if the Dua’s custody was handed over to the shelter home.

“I’m of the opinion that Shelter Home for Destitute & Orphan Children Social Welfare is the appropriate place for entrusting the custody during the period of trial or till further orders,” the magistrate said after hearing both the parties.

“Accordingly, the custody of the victim is hereby entrusted to the Shelter Home for Destitute & Orphan Children Social Welfare”, he ordered.

The magistrate also directed the child protection officer to ensure that no person was allowed to meet with the “minor/victim without seeking prior permission from the court”.

Furthermore, the magistrate ordered that the custody of the minor should not be moved from the shelter home unless the court or any other court of the competent jurisdiction issued written orders.