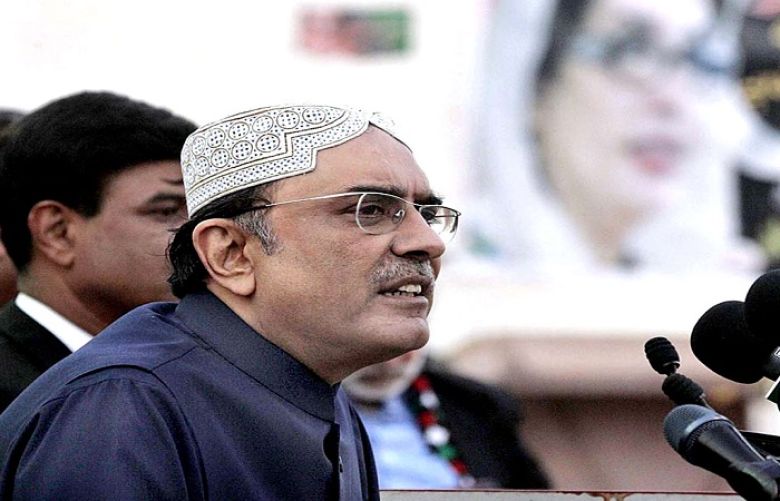 Pakistan Peoples Party co-chairman and former president Asif Ali Zardari has said that he sincerely wishes to see Bilawal Bhutto-Zardari as prime minister in his lifetime.

He said that when Bilawal went abroad as foreign minister he received calls from his old friends who told him Bilawal would brighten the name of the country.

He was speaking to newly-elected candidates of local government and PPP workers at Zardari House in Nawabshah on Tuesday evening.

He said that when he was president, he transferred power to the prime minister and the provinces through constitutional amendments. “Now, Islamabad says you have weakened us but I say I have strengthened the provinces,” he added.

He said that he would encamp in Punjab to patronise the party and strengthen it. “This land is mine, I am yours, you are mine. We all have to work hard for the betterment of Pakistan,” he said.

Pakistan Peoples Party co-chairman Asif Ali Zardari has said Kashmiri people are facing unprecedented oppression, tyranny and barbarism and they are in dire need of diplomatic help at the time.

He said that Kashmiris were in dire need of diplomatic help at this time. Muslims around the world should raise their voice in support of their oppressed brethern and sisters, he said.

He asked people to help the poor and the helpless in the joys of Eid, ‘as the day teaches to love and sacrifice’.

He said that PPP had always raised its voice against political and social injustices, and would continue to fight against poverty and the darkness of ignorance

He said: “We are fighting for a society where every citizen has economic and social justice and the state is a paradise for them”.

He said that they must all work together to discourage those elements who were trying to mislead the people under the guise of religion.

The former president offered Eid prayers at Zardari House where he met with local party leaders and notables.

Later, he arrived at his ancestral graveyard Baloo Ja Quba where he offered fateha and laid wreaths on the graves of his father Hakim Ali Zardari and other family members.