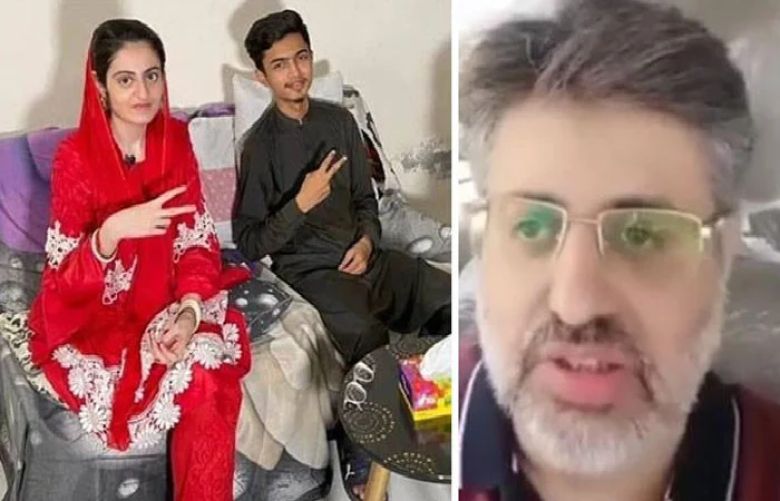 Supreme Court's Karachi registry on Thursday wrapped up the Dua Zahra case over the request of her father's lawyer to take back the plea challenging Sindh High Court's verdict in the case pertaining to the teenager's recovery.

Zahra had made headlines across the country after she had mysteriously disappeared from Karachi in April but later declared that she had run away from her home to marry 21-year-old Zaheer Ahmed.

Following the incident, her father — Mehdi Kazmi — had tried recovering his daughter, saying that since she was underage, her marriage was illegal according to Sindh laws.

However, the SHC — on June 8 — had issued a verdict in favour of Dua, allowing her to decide if she wants to go with her parents or her husband.

Unsatisfied with the court's ruling, Kazmi submitted a petition to the top court in which he pleaded for an immediate hearing of the case and called the SHC's decision faulty.

A three-member bench of the apex court conducted a hearing on Kazmi's petition today.

The apex court had earlier reserved a verdict on the plea after hearing the arguments from Kazmi's counsel. However, the court summoned the lawyers and petitioner to court again.

During the hearing, the court inquired if SHC allowed the parents to meet the girl.

At this, Kazmi replied that they were allowed to have a talk with Zahra for only five minutes in the police's presence at the SHC CJ's chambers.

Justice Muneeb Akhtar remarked that the SHC disposed of the plea seeking Zahra's recovery, asking if the case is currently under trial in any other court.

"Have you requested the court [SC] to recover Dua Zahra?" Justice Akhtar inquired.

Meanwhile, Justice Muhammad Ali Mazhar remarked that the marriage is supposed to be challenged in a family court.

"The girl has recorded her statement before the high court and magistrate," the justice remarked.

He inquired if the petitioner has challenged the medical board's report determining Zahra's age.

At this, Kazmi's counsel Jibran Nasir informed the court that they have written a letter to the health secretary.

However, the court directed the petitioner to approach the relevant forum for formation of a medical board, stating that the case doesn't fall under SC's jurisdiction.

Later, the court wrapped up the case over Nasir's request that Kazmi wants to take the plea back.

It may be noted that an ossification test carried out on Zahra as per SHC's order revealed that the girl is between 16 to 17 years of age, with a confirmation by radiologist Dr Saba Jamil.

While talking to the media, Nasir said that the court has told them that they can challenge the ossification test report and seek formation of another medical board to determine Zahra's age.

He said that they have made a request to the medical board but they will reach out to SHC again if the health secretary doesn't accept the request.