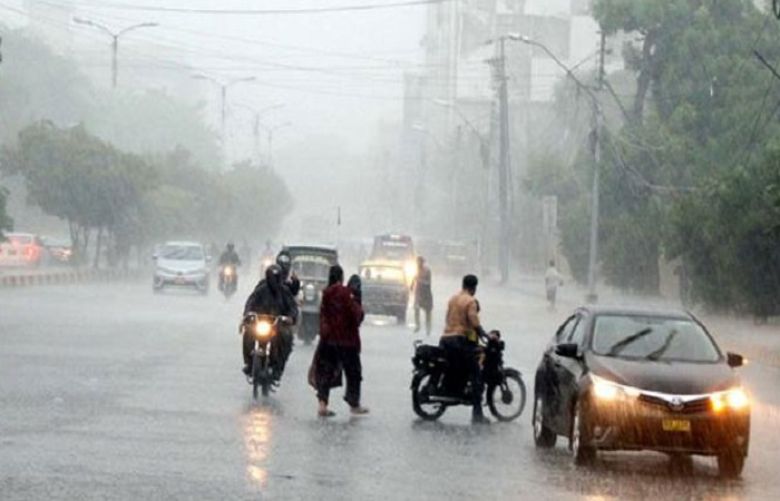 Karachi received its first spell of monsoon rain on Wednesday, with many areas seeing heavy downpours amid thunder, lightning and gusty winds.

Local Government Minister Syed Nasir Hussain Shah said officers of all local bodies had been ordered to monitor the situation on roads and ensure that drainage operations were carried out wherever there was a possibility of accumulation of water.

"All the machinery and staff are at work and conditions are good. I am supervising all the work myself and will go on a tour of the city," he said.

Sindh Health Department's media coordinator Mehar Khursheed said a rain emergency was not declared since Karachi was forecasted to have normal or below-normal rain.

She said the director general of health was ensuring the availability of doctors in Karachi and Hyderabad division's hospitals.

Meanwhile, K-Electric spokesperson Imran Rana said that reports were received of "strong winds and rains" in most parts of the city. He added that over 1,650 power feeders were still continuing to supply electricity to large parts of the city.

The Pakistan Meteorological Department (PMD) had previously predicted countrywide torrential rains from Monday due to a strong weather system entering the upper and central parts of the country. It had added that the weather system would persist till Wednesday night with downpours expected in Karachi from Tuesday evening till Wednesday.

However, the PMD's weather forecast issued today did not mention any rain in Karachi and instead, predicted "hot and humid" weather at a maximum of 35 to 37 degrees Celsius and a minimum of 29.5°C.

According to a statement from the spokesperson for the Karachi police, instructions were issued for the police force by Additional IG Javed Alam Odho after the forecast of rain.

He directed all field commanders to be present in their areas during rains, also instructing traffic police officials to perform their duties in their designated areas. The statement added that the Special Security Unit also instructed the rain emergency unit to be ready to deal with any possible urban flooding and assist the public at all times.

Patrol vehicles were also ordered to be equipped with the necessary tools and equipment to move stranded vehicles.

With the monsoon season just around the corner, City Administra­tor Murtaza Wahab said on Saturday that the cleaning and de-silting of 41 major storm drains in Karachi had been almost completed.

While visiting Jubilee Nullah, Garden Nullah, Soldier Bazaar Nullah and Regal Saddar Nullah, he had said that work on major drains was in full swing.