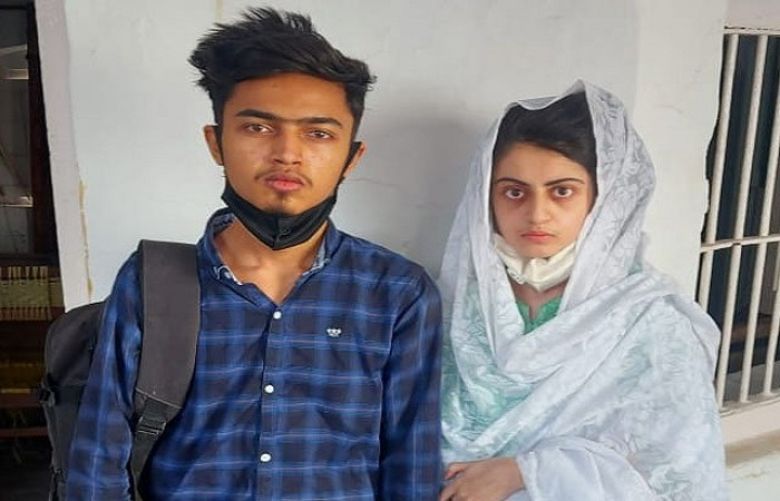 The Sindh High Court (SHC) Wednesday allowed teenager Dua Zahra — who had mysteriously gone missing from Karachi in April but later declared that she had run away from her home to marry 21-year-old Zaheer Ahmed — to decide where she wants to go, with her parents or husband.

In a three-page written order, Justice Junaid Ghaffar said the court reached the verdict in line with the testimonies. "In light of all the evidence, this is not a case of kidnapping."

"...the alleged/minor Dua E Zahra Kazmi, pursuant to her statement on Oath and Age Certificate is set at liberty to decide as to whom she intends to reside and go along," the order read.

In the order, the court also said that it has decided to dispose of Zahra's father's — Mehdi Ali Kazmi — petition for her recovery as the case of his daughter was not of kidnapping.

For the production of Dua before the Lahore High Court later this week, the SHC said the Sindh Police is at liberty to produce it if required. But the judge said that "we, after production and statement of the alleged abductee Dua, are not inclined to issue any further directions to that effect."

The SHC earlier in the day reserved the verdict after police presented Dua and her 21-year-old husband Zaheer Ahmed before the court after the ossification test as per the court's orders passed in the last hearing.

During today's hearing, Justice Ghaffar allowed Dua's parents to meet her for 10 minutes in his chambers as they were not permitted to speak to her earlier.

On Monday, Dua refused to meet her parents. It was the first time she was presented before the SHC after she was recovered by the Punjab police more than one-and-a-half months into her mysterious disappearance.

But today, after meeting her parents, the girl's mother spoke to journalists and said that Zahra told her that she wants to come home.

"My daughter said in the meeting that I want to go home. Dua said she will give her statement in court," the mother said.

The SHC had ordered the authorities to conduct an ossification test to determine Dua Zahra's age. She had claimed to be 18 years old — old enough to marry out of her own free will.

The ossification test report, however, suggested Dua is 16 or 17 years old. The report was also confirmed by a radiologist, Dr Saba Jamil. However, Dua's father Kazmi has expressed reservations over the medical report of his daughter and termed it "false".

He challenged the report in court.

Talking to the media, Mehdi's counsel Altaf Khoso said the report is based on malafide intent and that they have all the documents that provide evidence for Dua's age.

"No medical board was formed for the determination of Dua's age and a junior doctor prepared the report but the court has to decide," Khoso said.