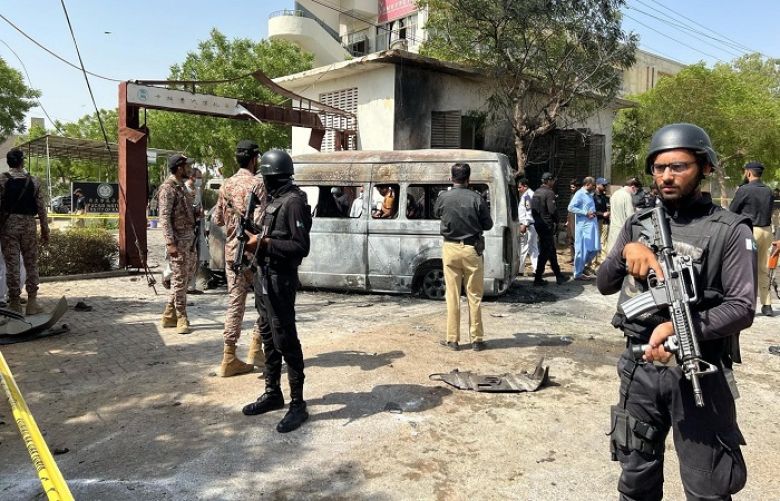 Four people, including three Chinese nationals, were killed while several others sustained injuries in a car explosion on the premises of the University of Karachi.

The explosion occurred at 1:52pm in a van near the Confucius Institute — a Chinese language teaching centre at Karachi University. Following the blast, rescue and security agencies rushed to the location and cordoned off the areas, initiating rescue operations.

The deceased Chinese nationals have been identified as the director of the Confucius Institute Huang Guiping, Ding Mupeng, Chen Sai, and their Pakistani driver, Khalid.

Police sources said the van entered the premises through the Maskan gate of the university, they said.

Of the four people who sustained injuries, two have been identified as Chinese national Wang Yuqing and a security guard named Hamid.

The explosion was initially reported to have been caused by a gas cylinder. However, the police later said that the blast could have been a suicide attack. Sources further added that the victims were returning to the Confucius Institute from the Institute of Business Administration (IBA).

'It was a suicide attack'

In Charge of the Counterterrorism Department (CTD) Raja Umar Khattab confirmed that it was a suicide attack and a burqa-clad woman seen in the CCTV footage was responsible for it.

"A separatist group has also claimed responsibility for the attack," Khattab said, adding that the terrorists, after surveillance, targeted the vehicle carrying the foreigners.

He added that Rangers personnel were present alongside the vehicle on their motorbikes when the explosion occurred.

Meanwhile, a police report said that about three to four kilogrammes of explosives were used in the blast.

Karachi police chief Ghulam Nabi Memon said the bomb disposal unit was determining the nature of the blast and would soon release the report.

"...four people who have been injured are being treated at different hospitals, while the bodies of the deceased have been shifted to Chippa mortuary," Memon told journalists.

The police official lamented that the people who were killed in the blast were teachers — three foreigners and one Pakistani. He added that it was too early to say who was behind the blast.

The metropolis police chief said "security arrangements were adequate" in the varsity, and in case of a lapse, it will be reviewed and worked upon.

The Sindh CM issued directives to shift the injured to the Dow University Hospital, situated near the University of Karachi. He directed officials to ensure the provision of all facilities to prevent any casualties.

The chief minister has also asked the Karachi commissioner for a detailed report of the blast.

CM Shah also reached the Chinese Consulate and briefed the consul general on the explosion at the University of Karachi.

He expressed deep sorrow and grief over the demise of three Chinese nationals in the explosion and assured the consul general of a thorough probe into the blast.

Shah vowed that the suspects involved in the blast will be brought to justice. “Some conspirative elements do not like the Pakistan-China partnership,” he said, adding that the elements will be dealt with an iron hand.

The chief minister said that the government assigns great value to the services of Chinese expatriates in the country and the province.

The Chinese Li Bijian thanked the chief minister for his visit and said he was in contact with the families of three Chinese nationals killed in the blast. “Whatever decision is taken in respect of shifting the dead bodies back to China would be informed to the Sindh government,” Li Bijian said.

"I am deeply grieved on the loss of precious lives including of our Chinese friends in the heinous attack in Karachi today. My heartfelt condolences go to the bereaved families. I strongly condemn this cowardly act of terrorism. The perpetrators will surely be brought to justice," he tweeted.

PM Shehbaz also made a telephone call to Sindh CM and assured him of full cooperation in the blast-related investigations. The prime minister directed the chief minister to ensure the best medical facilities for the injured.

Condemning the blast, PPP Chairman Bilawal Bhutto-Zardari expressed his sorrow over the incident and sent heartfelt condolences to the people of China on behalf of Pakistan.

PTI Chairman Imran Khan also condemned the blast and said demanded a thorough investigation into the matter. He also sent his condolences to the bereaved family members of the deceased. The former premier demanded the Sindh government provide adequate facilities to the injured.

Foreign Office spokesperson also expressed strong disapproval of the attack and said that the government and people of Pakistan extend their deepest condolences and sympathies to the families of victims who lost their lives in the incident.

"The law enforcement agencies are investigating the incident to apprehend the culprits and bring them to justice. Local authorities are also providing all possible assistance to the injured," the FO said in a statement.

"The cowardly incident is a direct attack on the Pakistan-China friendship and ongoing cooperation. Pakistan and China are close friends and iron brothers. Pakistan attaches great importance to the safety and security of Chinese nationals, projects, and institutions in Pakistan."

According to sources, the University of Karachi had sent a letter to the Confucius Institute and had expressed concerns related to the security of the foreign teachers.

In the letter, which was sent to the institute 26 days ago, the university had written that the foreign teachers were often seen travelling outside of the university premises without accompanying security personnel.

Following the incident, the University of Karachi, in a notification, announced the suspension of classes on Wednesday, April 27.