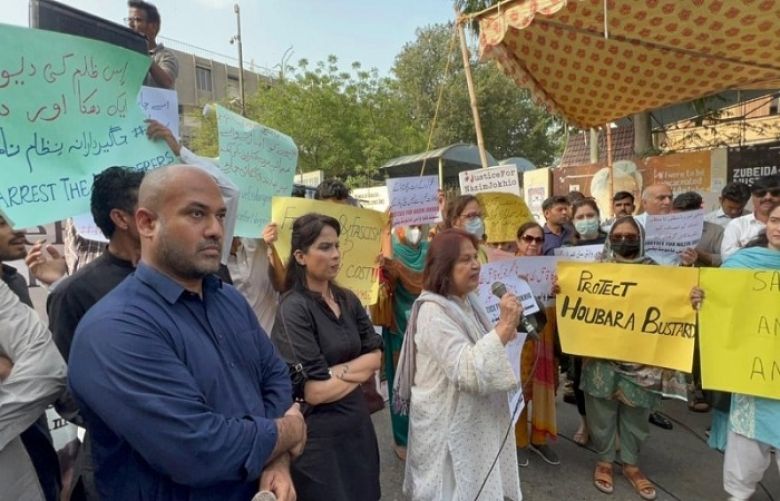 Members of civil society held a protest outside the Karachi Press Club (KPC) on Tuesday demanding justice for Nazim Jokhio, who was found murdered at the farmhouse of a PPP lawmaker in November.

MPA Jam Awais and his brother, MNA brother Jam Abdul Karim, along with several others were booked for allegedly torturing Nazim to death after he stopped their foreign guests from hunting houbara bustard.

Last week, police excluded the names of the two lawmakers from the final charge sheet submitted to an antiterrorism court, setting the stage for their exit from the murder case.

During today's protest, scores of participants held up placards demanding justice for the deceased and lambasted the abuse of power by the lawmakers.

Karamat Ali, executive director of the Pakistan Institute of Labour Education and Research, said that he had not seen a "bigger injustice" than this.

Nasir Mansoor of the National Trade Union Federation Pakistan said that the participants of the protest had registered a "people's FIR" against the PPP's "anti-people and anti-Sindh policies". He stated that Nazim was the first person in the country to be martyred for an environmental cause.

Uzma Noorani from the Women's Action Forum (WAF) said that the group was standing with Nazim's widow, Shireen Jokhio.

"She was all alone and a WAF team met with her. She told the team that she didn't even have enough money for a single meal," she said, adding that the group tried to help her financially and by providing legal aid.

She said that they had not expected the PPP to treat a widow in this manner. "Nazim Jokhio was a human rights defender, just like us. Tomorrow, we could meet the same fate," she said, adding that Shireen backed down due to "pressure".

Lawyer and rights activist Jibran Nasir said that the protesters had gathered not merely to chant slogans against the PPP but to demand justice and talk about principles.

"Nazim was also a (PPP) jiyala," he said, adding that the only difference was that the deceased was a common man. "This is a class war for which we have taken to the streets."

He added that the prosecutor in the case was acting like the "defence counsel" while the police — which was supposed to investigate the case — had become an "aider and abettor".

Member of the National Commission for Human Rights and eminent activist Anis Haroon called on the media to stand with the protesters and highlight the case.

"Our laws and the Constitution are the same for all," she said, calling on the Sindh government to provide justice to the family of the deceased. "How will you ask us to vote for you when you will not stand for justice?"