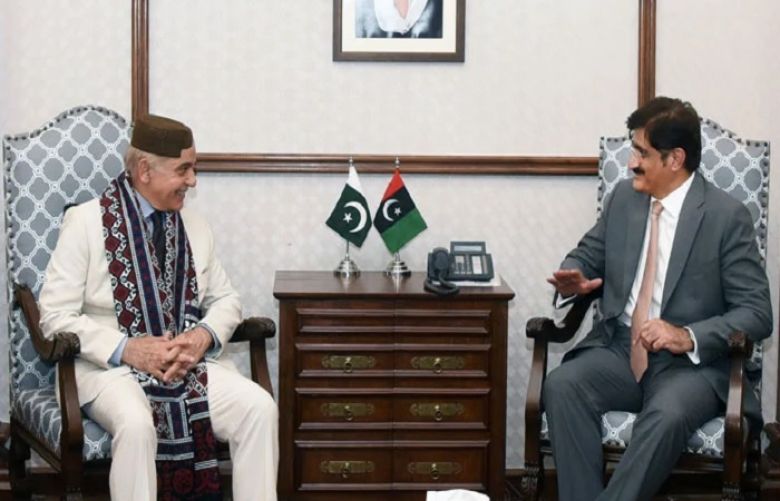 Shehbaz was in Karachi on a day's visit and has left for Islamabad after paying his respects at the Quaid-e-Azam mausoleum and meeting Chief Minister Sindh Murad Ali Shah and MQM-P leaders.

Speaking to journalists, after his one-on-one meeting with CM Shah — where they discussed political, economic, and several other issues of the province — Shehbaz mentioned that earlier Chinese authorities had shown interest in KCR; however, due to political changes, things weren’t finalised.

Shehbaz assured CM Sindh regarding the federal government’s support for the development and betterment of the province.

Terming Karachi’s drinking water issue, the “biggest challenge”, the premier said that he has requested CM Sindh and other relevant authorities to complete the programme — under which half capacity requirement will be fulfilled —by 2024 directing him to ensure that full capacity requirement is met.

He said: “We will be following the will of Allah if we are able to resolve Karachi’s drinking water issue.”

“I have suggested Shah bring thousands of air-conditioned buses in a transparent manner while pre-qualifying transporters followed by a bidding,” he said, adding that transporters will then be allowed to take a loan from banks at minimal interest rates.

He also acknowledged the Sindh government and the chief minister for their warm hospitality. The PM was also presented with ajrak by the Sindh CM.

Before the leaders' press conference, they held a meeting, where, according to the spokesperson of the Chief Minister House, the prime minister directed the chief minister to make all-out efforts for the welfare of the people and the safety of their lives and properties.

The chief minister congratulated the premier on the occasion for assuming the office of the prime minister and assured him that the Sindh government will work closely with the federal government for the welfare of the people of the province.

During the meeting, CM Sindh informed the premier that Karachi Transformation Plan (KTP) was announced in 2020 with an outlay of Rs1.17 billion for various projects in the areas of water supply, sewerage treatment management, internal roads, and mass transit.

The share of the provincial government is Rs686 billion whereas the federal PSDP share is Rs487 billion, the chief minister said, adding that the total cost of public-private partnership projects, at an advanced stage, was Rs176.9 billion and the total viable gap fund for the projects was Rs32 billion every year.

The chief minister requested the prime minister to issue necessary directives for the issuance of sovereign guarantees for mega projects and allocate Rs10 billion per year to finance provincial governments' annual obligation of Rs32 billion.

At this, the prime minister assured the chief minister that the federal government would support the Sindh government.

Following his meeting with CM Shah, the prime minister visited the MQM-P's Bahadurabad office where he held a brief session with the party's leadership, with party convener Khalid Maqbool Siddiqui and others in attendance.

Shehbaz, after the meeting, left for Islamabad and MQM-P leader Khawaja Izhar-ul-Hassan said the matters of his party's members being included in the federal cabinet and being awarded the governorship were not discussed.

"These matters will come under discussion in Islamabad [...] nothing was decided in today's meeting as this visit was a gesture of goodwill," Hassan told journalists.

Meanwhile, Siddiqui told journalists that the matters related to the ministries came under discussion in detail during the meeting of the leaders at the CM House.

Earlier in the day, CM Sindh and other leaders had received PM Shehbaz — who visited Karachi for the first time after taking the oath as the prime minister two days back.

The PM's special flight had landed at the PAF Faisal Air Base.

Soon after his arrival, the premier along with the leaders of allied parties paid his respects at the mausoleum of Quaid-e-Azam. He also laid a floral wreath at the mausoleum and offered Fateha