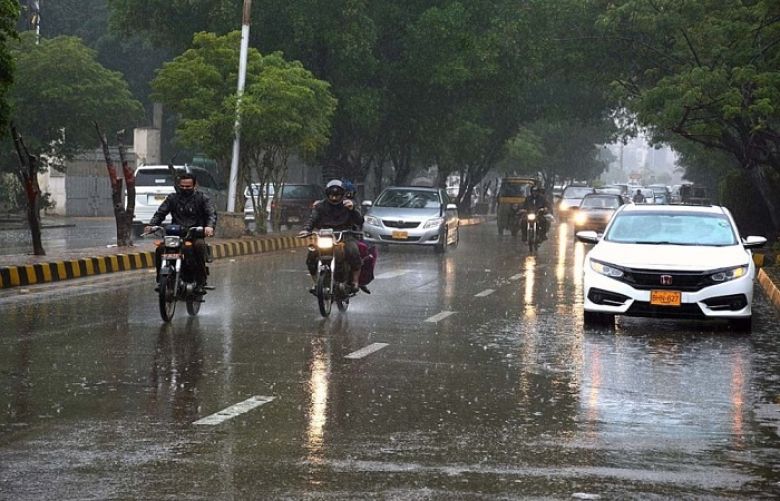 Karachi experienced its first spell of winter showers on Monday, with various areas of the city receiving light to heavy rain.

According to a fresh forecast issued by the Met department today, Quaidabad and Gulshan-i-Hadeed received the highest rainfall at 5millimetres each. Surjani Town received the next highest level at 4.5mm, while 4mm rain was recorded at Kemari and PAF Masroor Base. University Road received 3.8mm rainfall, Jinnah Terminal 3.4mm, North Karachi 3.2mm.

The forecast said the weather today will be "cloudy with intermittent rain and chances of a thunderstorm", whereas it will be "partly cloudy with chances of light rain" on Tuesday. However, "fair" or clear weather is expected to be back on Wednesday.

Meanwhile, the city's sole power utility Karachi Electric (KE) shared an update at 10:30am that all power plants were operational as per routine.

"Areas [where power supply has] been restored after rain include Gulshan-i-Askari, Rangers Headquarters, Scheme 33, Jiwani Heights, Sindhbad, PECHS Block 2 and 6, FB Area lock 7,12,15 and 18, Korangi Area among various others.

"Other areas that are also completely restored areas include Gulshan-i-Iqbal Block 10A, Gulistan-i-Johar Block 9 and 18, as well as some areas of Defence," the update said.

KE said restoration work was progressing swiftly in some parts of the city and the power supply will be restored shortly.

The power utility cautioned people to maintain a safe distance from electricity infrastructure and ensure taking safety precautions while using electronic appliances in case of rain.