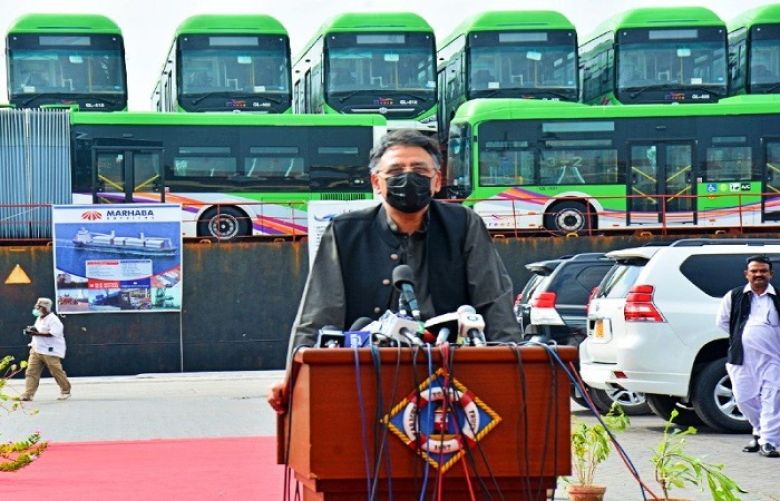 The much delayed Green Line bus project in Karachi finally appears close to its completion as Planning Minister Asad Umar on Sunday said its commercial operation is to begin from Dec 25.

The minister, in a tweet, said that the project will be ready for a trial operation within the next 10 days, following which it will be formally inaugurated by Prime Minister Imran Khan and then its commercial activities could begin.

"I conducted a detailed reviewed the Karachi Green Line project yesterday (Saturday). With the grace of Allah, this project will be ready for trial operation in the next 10 days," he said in a tweet.

Work on the Rs16.85 billion federal government-funded bus project had begun after then-prime minister Nawaz Sharif inaugurated it in February 2016 by performing the groundbreaking.

Later, the project was extended by another 10 kilometres as initially sought by the Sindh government and the estimated cost crossed the figure of Rs24bn.

The project was estimated to be completed by the end of 2017, but kept getting new deadlines. Since the launch of the scheme, the battered roads on either side of the route have turned into a great source of nuisance for commuters and for the shopkeepers doing their businesses.

The second and final consignment of 40 buses for the Green Line project arrived in the city on Oct 21, raising the number of buses to 80, rekindling citizens’ hope that Bus Rapid Transit System (BRTS) in the metropolis was set to be launched. It is supposed to facilitate travel of approximately 300,000 passengers daily.

The first batch of 40 buses had arrived in the city on Sept 19 which the planning minister had referred to as a “ray of hope” and “milestone”, calling it the beginning of modern public transport service for Karachiites after a long gap of 40 years.