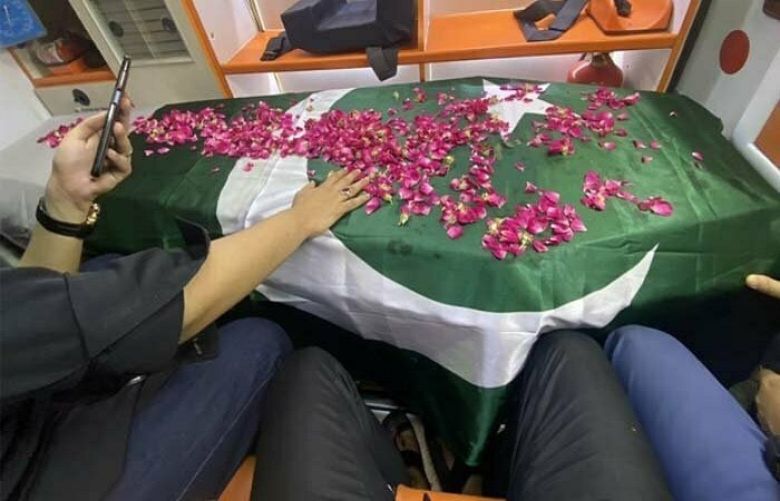 According to the aviation sources, Turkish Airlines flight TK-708 took off from Istanbul at 12:53 am. The scheduled flight landed at the Jinnah International Airport at around 5:33 am.

Umer Sharif's body was flown to Munich from Nuremberg, Germany, before being flown to Istanbul aboard Turkish Air flight TK-1634.

The deceased's wife Zareen Ghazal also returned to Pakistan on the same plane. His sons and other relatives received his body at the airport. Among others, PPP leader and Sindh minister Saeed Ghani, MQM's Kishwar Zahra also arrived at the airport's cargo terminal.

The PPP leader paid tribute to the comic genius. "I call upon the people to attend Umer Sharif's funeral in large numbers as a message to the entire world that Pakistanis remember their legends even after they had passed away," Ghani said while talking to media.

Later, his body wrapped in the national flag was shifted to the Edhi morgue at Sohrab Goth. His body has been shifted to his residence in Karachi.

Fans of the comedian showered the vehicle carrying his body to the morgue with rose petals, paying tribute to the legend.

Umer Sharif's sons - Jawad Umer and Fawad Umer - have said that their father's funeral prayers will be offered at 3pm at the Umer Sharif Park opposite the Ziauddin Hospital in Clifton.

He will be buried in the cemetery adjacent to the Abdullah Shah Ghazi shrine in the area, as per his wishes.

People are showing up in large numbers outside the comedian's Gulshan-e-Iqbal residence to pay tribute to him.