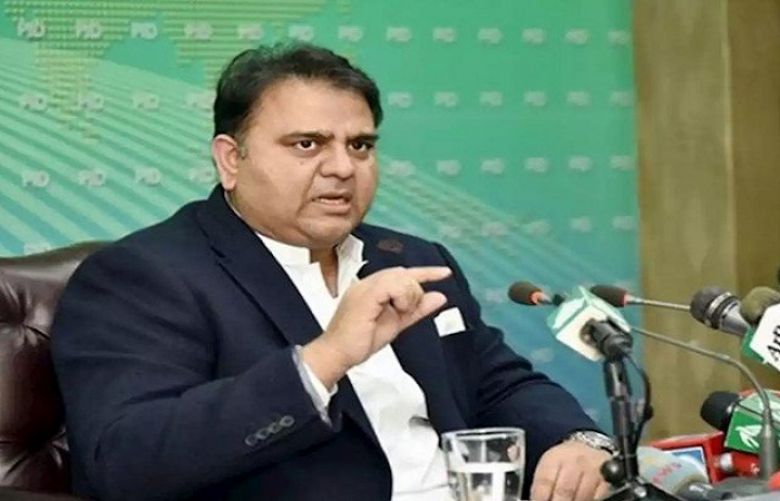 Information Minister Fawad Chaudhry on Sunday hit out at PPP Chairperson Bilawal Bhutto-Zardari and the Sindh cabinet, blaming them for "stealing Sindh's water".

In a hard-hitting press conference at the Governor House, the minister said Punjab was not stealing Sindh's water but Bilawal and Sindh Chief Minister Murad Ali Shah and the provincial cabinet were guilty of the crime.

"The water never runs short when it comes to Zardari and his sister's lands," alleged Chaudhry.

He said independent observers should find out how much water is provided to Sindh and the amount that is used up by the provincial government.

Chaudhry accused the Sindh chief minister of resorting to "politics of nationalism", adding that he was distancing himself from the political principles adopted by PPP founder Zulfikar Ali Bhutto.

He said the Centre had increased the share for provinces in the federal budget, adding that Sindh would receive more than Rs750bn according to the NFC award.

"If so much money is coming in (each year) where is it going?" he asked. "They were unable to create a [competent] police force in the city. They have to seek help from the Sindh Rangers every time," added the minister.

He expressed displeasure of the dismal law and order situation of Sindh, adding that the Karachi police was not even aware of the city's problems.

"Whoever wants to loot a car in Karachi can do so with impunity," he lamented.

Turning his guns towards the PPP leadership, Chaudhry accused Zardari of limiting the chief minister and assembly's role.

Criticising the Sindh government for what he deemed their lacklustre administration, Chaudhry said people were demanding the imposition of Governor rule in the province.

"However, there is no provision for it [Governor rule] in the Constitution," he added.

The minister lashed out at the PML-N as well, adding that the PML-N "does not have a future" in General Elections 2023 as well.

He said the government's budget 2021-22 was a people-friendly one, adding that this year Pakistan will grow its economy. The minister added that the government had decided to slash prices of smaller cars to benefit the common citizen.

"People who have white-collar jobs will immensely benefit from the Kamyab Jawan Programme and the government's housing projects," he said.

The problem of water scarcity has reached Karachi as Sindh has continually been receiving much less water than its share, Sindh Irrigation Minister Sohail Anwar Khan Siyal said a day earlier.

The water crisis is deepening in the province, he had said, adding that apart from the less release of water, the federal government had been doing injustice to Sindh in power and gas supply, and insufficient release of funds under the NFC award.

Siyal was speaking on Friday to the media during a visit to the shrine of Abdullah Shah Ghazi in Clifton for Youm-e-Dua observed in Sindh on the appeal of the Sindh government to end the persisting water crisis.

The Guddu Barrage in Sindh had been facing water shortage, but the Sindh government had to face the baseless accusation of stealing water from the share of Balochistan, he had said.

The irrigation minister had said that every canal in Sindh was facing water shortage, but the government's complaints had fallen on deaf ears.

He said the provincial authorities had lodged over 40 FIRs against instances of irrigation water meant for cultivation being stolen.