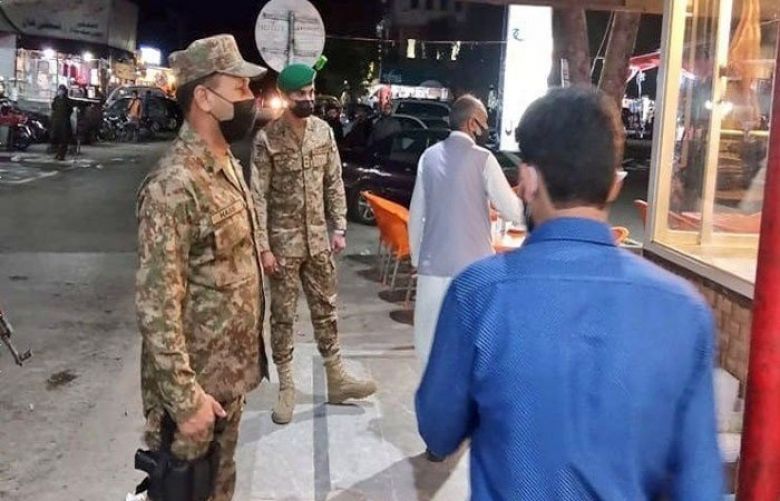 The government of Sindh has sought help from the Pakistan Army in implementing coronavirus SOPs as cases of the virus surge across the country.

The provincial government has written to the Ministry of Interior, seeking the army's help for the civil administration under Article 245 of the Constitution.

Sindh government said it would inform the interior ministry about details regarding troop employment and equipment after holding consultations over the matter.

On the other hand, Sindh information ministry Nasir Hussain Shah has warned that the provincial government will impose a lockdown if the situation turns alarming in Sindh.

"The provincial government is ready; if [coronavirus] situation worsens, we will impose a lockdown," he had said on Saturday.

A day earlier, army troops were deployed in Islamabad and Peshawar after PM Imran Khan announced their help would be needed in ensuring implementation of safety protocols.

Officials of the Islamabad administration had visited various areas in the city on Friday with army personnel in tow to enforce the implementation of coronavirus protocols.

The district administration, in a statement, had said 1,997 inspections were carried out on Friday, while 28 shops and one restaurant were sealed for violating coronavirus SOPs.

Nine people were arrested for hoarding and violation of SOPs, the administration said, adding that fines worth Rs226,000 were imposed for not abiding by safety protocols.

The army and district administration officials had also inspected 85 mosques, said the statement.

On Friday, Prime Minister Imran Khan said he has directed the military — as well as police and Rangers — to help ensure that SOPs regarding COVID-19 are being strictly implemented and followed.

In a televised address after chairing a meeting of the National Coordination Committee (NCC) over COVID-19, the prime minister had urged the masses to adopt preventive measures against coronavirus so that the situation remains under control and a lockdown of big cities is avoided.