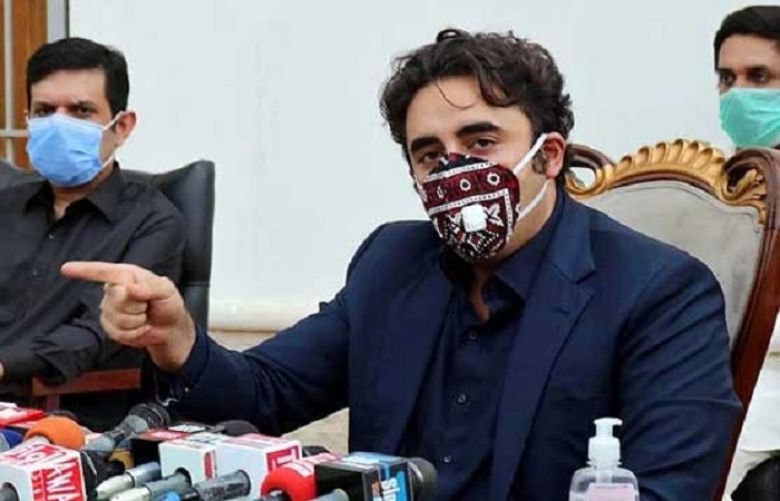 PPP Chairman Bilawal Bhutto-Zardari on Wednesday claimed that the government is being shown a "tough time" by the Opposition even with their fewer numbers, ahead of the Senate polls on March 3.

"We know we are descending down on the battlefield with fewer votes. We know it seems our numbers are low. But even with these small numbers, we are giving the government a tough time," he said, while addressing a press conference in Lahore alongside joint Opposition candidate Yousuf Raza Gilani.

He thanked all the Opposition parties for having decided to support Gilani on election day.

"InshaAllah, Senate elections will be a victory for democracy and for democratic candidates. And Yousuf Raza Gilani's win will usher in a new chapter of democracy," the PPP chairman said.

"And then, at the end of March, we will have a march," Bilawal added.

"The democratic journey for which we are all struggling will be taken forward [...] We are telling everyone: give this crumbling wall the final push."

Responding to a question by a journalist, Bilawal insisted that the Pakistan Democratic Movement stands united, "as it always has been". He said the PDM is only focused on fighting the Senate elections currently, and will only ponder over whether to go for a no-confidence motion after the polls.

To another query about whether PTI's Jahangir Khan Tareen, with his "aircraft" poses any threat to the Opposition, Bilawal said: "Well we won't be able to compete with an airplane but we will compete on the basis of our character and democracy."

He said voters must decide for the betterment of the parliament and they have this time a candidate who is a former prime minister. "Yousuf Raza Gilani (when he was premier) would respond to questions from the government and Opposition, come to the parliament, give everyone respect [...] you do this because you are the leader of the entire House, not your own political party," he said.

Pakistan's parliamentarians must choose — do they want a technocrat or democracy, he said.

"This is a test for the members of our assembly. Will you vote according to the people's expectations or out of fear of Imran Khan?" Bilawal asked.

When asked whether this move to fight the Senate elections, when the Opposition's numbers in the National Assembly are not in the majority, would mean the government being ousted through a lack of trust from its own members, Bilawal said: "I have always spoken of democracy and parliament and this is the field where we can fight. We believe no battlefield must be left vacant. We want the government to be changed through democratic means."

The PPP chairman said it was the incumbent government that used "other tactics", such as using National Accountability Bureau and "dictatorial tactics", against his own members and allies. "Such a thing may go on for a while but we all know if this country is to progress, it is with democratic means," he said.

"We must move forward according to the people's expectations and not because of pressure from some other quarters," Bilawal said.

He said that it seems institutions are playing a neutral role ahead of the Senate polls and he said that this must be welcomed.

The PPP chairman said PDM has been "working against the illegitimate, incompetent and unqualified government from day one".

Bilawal also spoke of the Charter of Democracy, saying he wishes for it to be implemented. He said he recognises it will be better for Pakistan and for Peoples Party as well.

The party chairman said that any amendment to the law or Constitution can only be brought through the parliament. He said after the Senate polls, the Opposition will work on election reforms.

He said the Opposition aims to bring a government that "instead of burdening the people lifts the burden off their shoulders".