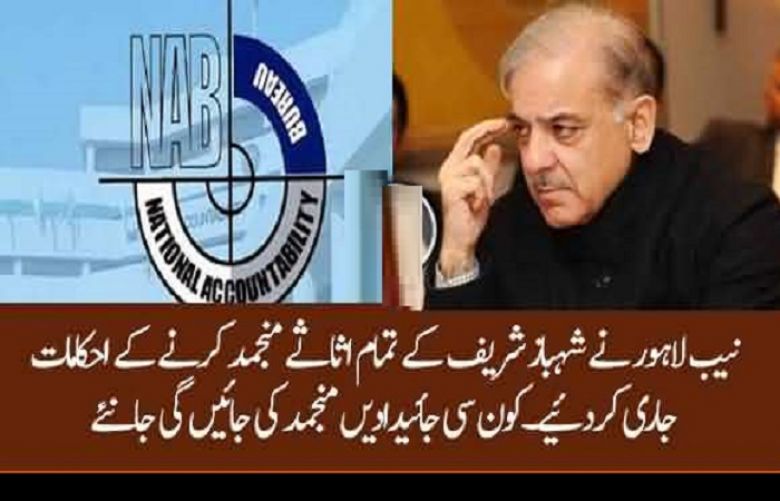 An accountability court in Lahore on Wednesday confirmed the National Accountability Bureau (NAB) Lahore's orders to freeze properties owned by PML-N President Shehbaz Sharif, his sons Hamza Shehbaz and Salman Shehbaz, and other family members in connection with an investigation involving them in the income beyond means and money laundering case.

The court's confirmation means that Shehbaz and his family members can neither sell their assets nor will the profits gained from the family's properties go to them, according to NAB special prosecutor Hafiz Asadullah.

The decision comes a week after NAB Lahore Director General Shahzad Saleem froze 23 properties of Shehbaz, his sons and other family members in the income beyond means and money laundering case under Section 12 of the National Accountability Ordinance, 1999.

The NAB orders were to remain in place for 15 days, during which NAB filed an application in the accountability court for their confirmation.

“Having examined evidence collected so far during investigation, it is found that there are reasonable grounds for believing that the accused — Shehbaz Sharif, Hamza, Suleman and other Shehbaz Sharif’s family members — have committed the said offences. These properties, therefore, are attached under Section 12 of the NAO 1999 till the disposal of the reference by the accountability court,” an official had earlier told Dawn.

Accountability Courts Administrative Judge Ameer Muhammad Khan in his detailed judgement noted that the Shehbaz family members nominated in the case have been accused of retaining assets beyond their ostensible means and the proportion of their wealth from 2003 to 2018 prima facie "is not proportionate to the known sources of the accused which has not been explained by the accused".

"At this stage, even the provisions of the protection of Economic Reforms Act, 1992, would not be helpful to the accused party unless the sources of the said payments [are] disclosed by them," the judgement states.

It says the NAB freezing orders against the Shehbaz family are also supported by the statements given by approvers namely Muhammad Mushtaq alias Cheeni, Yasir Mushtaq, Shahid Rafique and Aftab Mehmood.

While confirming the freezing orders, the court has stated that the Shehbaz family members have 14 days to file objections against the orders.

According to NAB, the frozen properties include two houses in Model Town and Nishat Lodges in Dounga Gali, Murree which were acquired by Shehbaz in the name of his wife Nusrat Shehbaz.

A cottage, a villa and a plot in Haripur and two houses in Defence Lahore were acquired by Shehbaz in the name of his other wife, Tehmina Durrani.

Land measuring over 390 kanal in Chiniot is in the name of Hamza Shehbaz and Suleman Shehbaz. Nine plots measuring five marla each in Jauhar Town and an over five-kanal house in Judicial Colony Lahore are in Hamza's name.

Shehbaz has been on bail in Ramzan Sugar Mills and Ashiyana Housing cases, while Hamza is on judicial remand in the income beyond means, money laundering and Ramzan Sugar Mills cases. Suleman is absconding and presently resides in the UK