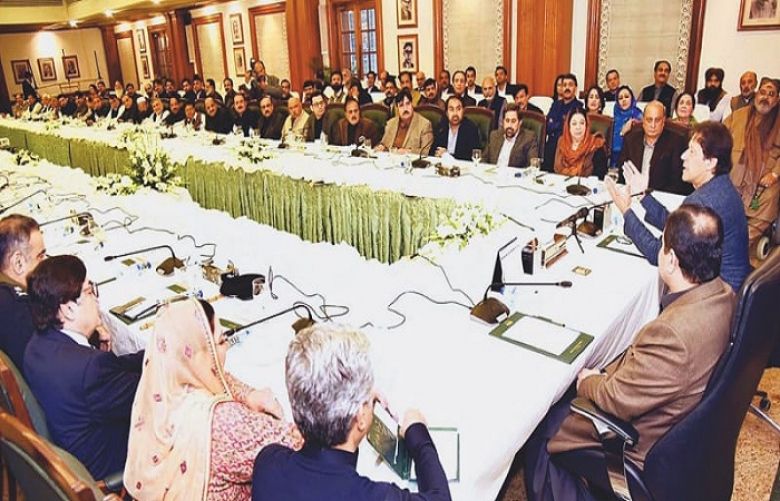 In another meeting, PM Imran Khan once again made it clear that Punjab CM Usman Buzdar will complete his term.

Sources said that during one of the meetings with members of the Punjab cabinet and MPAs at the CM Secretariat, the PM said that he knew everyone sitting in the meeting wanted to become the chief minister, but he would continue standing with CM Buzdar.

“Those aspiring to replace Mr Buzdar should wait for the next four years,” asserted the prime minister.

He said Mr Buzdar was neither living in palatial houses nor spending Rs800 million per annum on his personal security.

During meetings with MPAs, senior government and police officials and at a press conference, Mr Khan said his government had fought with the “mafia” during the past 15 months and survived.

In separate meetings, Imran outlines decisions taken to fight pollution, assures bureaucrats their tenure of posting will be protected.

He said although the “mafia” and opposition parties were sure that the PTI government would not survive beyond a few months, but “Pakistan has come out of the crisis and good times are round the corner”.

The prime minister said the government in consultation with former bureaucrats had gone through a rigorous exercise for three weeks and posted bureaucrats at all positions on merit.

He hoped that the new team of bureaucrats would streamline governance affairs and bring about a positive change in Punjab.

The prime minister, however, parried a question that the bureaucracy had stopped taking bold decisions and launching new initiatives following his warning that anyone found involved in corruption would be taken to task.

Mr Khan, in his earlier days, had also held meetings with the bureaucracy in Lahore and Islamabad but his ministers and other top brass continue complaining against the bureaucracy’s inaction when it comes to taking decisions and launching initiatives that involved big finances.

In the meeting with senior government and police officials, the prime minister told them to focus on governance and law and order. “We need to discard the old system and mindset in Naya Pakistan,” he said.

Promising that the tenure of the new team would be protected, Mr Khan demanded that the bureaucracy take decisions without taking political pressure into account and bring about real change in Punjab.

“It is now the bureaucracy’s duty to take all decisions on merit and refuse any illegitimate order of any politician,” he said.

He said the bureaucrats’ good governance would eventually help the government to attain economic stability. Mr Khan also congratulated his economic team for steering the country out of the crisis and leading it towards economy stability.

The prime minister chaired a meeting on the issue of smog and environmental pollution. He later told a press conference that his government was giving priority to controlling the smog and measures “should have been taken decades ago as recommendations were always available”.

Lamenting that smog and environmental pollution is severely affecting the health of elderly persons and children, the prime minister explained that the cutting of 70 per cent trees in Lahore, traffic pollution, burning of crops’ residue in Indian Punjab as well as thick smoke emitted by oil furnaces and brick-kilns were contributing to environmental degradation.

Considering these life-threatening factors, the prime minister said five decisions had been taken to avert the pollution crisis gradually in the next three years.

He said the government had decided to import Euro 4 oil (instead of Euro 2 oil) that had much less chemicals and could guarantee lessen air pollution by 90 per cent. The government would convert buses on CNG from the beginning of the next calendar year.

Mr Khan said oil refineries would be given three years to improve their technologies to better refine crude oil and added duty on scrubber would also be abolished. He said brick-kiln owners would be offered loans on six per cent to convert kilns on the zigzag technology.

He said the government would import machinery at a cost of Rs300 million that would uproot the crops residue, which could later be sold.

The prime minister said trees serve as a major resistant to pollution and sapling would be planted on 60,000 kanal land in Lahore. “The people will see a clear-cut decline in environmental pollution in the next three years,” he said.

The prime minister said previous governments with experienced teams had increased the country’s debt by four times but the economic team of the PTI worked hard and steered the country out of the fiscal crisis.

Afraid for being held accountable for corruption and money laundering, Mr Khan said the opposition parties joined hands and marched on Islamabad under the leadership of JUI-F chief Maulana Fazalur Rehman. “The marchers did not even know why they were marching on Islamabad,” he said and alleged the Maulana was not going to “conquer” the capital but win a “diesel permit”.

The prime minister said the government had allowed former PM Nawaz Sharif to go abroad for treatment purely on humanitarian grounds since the medical reports presented to him explained that the patient was on the verge of death.

“Since the court has sought Mr Sharif’s medical reports every two weeks, let’s see what will come out,” the prime minister said.

He said 95 per cent farmers had 12 acres of agriculture land and they would be facilitated to get loans by just getting their land record verified.