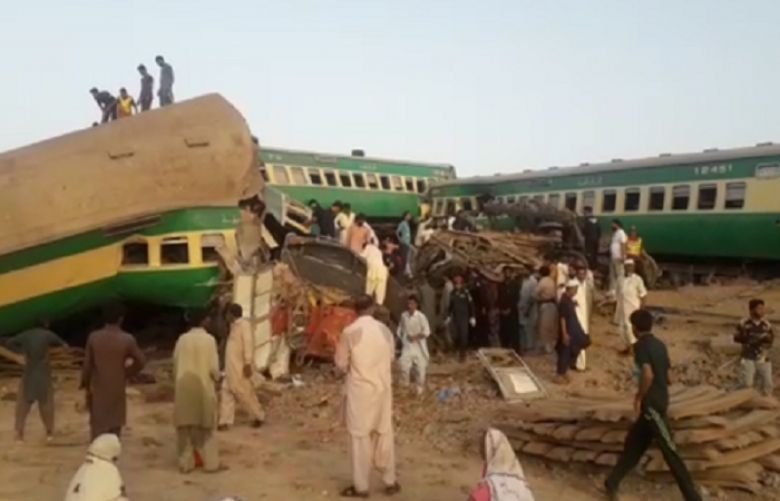 The death toll from a collision between two trains in Sadiqabad has risen to 21, officials said on Thursday, the second deadly train accident in Pakistan in less than a month.

Officials said the Akbar Bugti Express travelling from Lahore to Quetta collided with a stationary freight train at the Walhar Railway Station in Sadiqabad Tehsil of Punjab province.

Eyewitness to the train accident said the accident occurred at 4am when most of the passengers were sleeping. They added that they initially rescued passengers on a self-help basis from the bogies and that rescue teams arrived at the scene of the accident till not much later.

Video footage from earlier in the day showed the heavily damaged train engine and carriages, as emergency workers and local people used metal-cutting tools and heavy cranes. The regional police officer (RPO) in the area said rescue teams, using hydraulic cutters, have now recovered all the dead and wounded from the wreckage and completed their operation.

Sources at the Jinnah and Shaikh Zayed hospitals said that three people injured in the accident succumbed to their wounds during treatment, raising the death toll to 21.

The RPO confirmed the death toll and said 89 people were injured.

Railways Minister Sheikh Rasheed Ahmed expressed deep grief and sorrow over the loss of lives in the accident and said the accident occurred due to negligence.

The minister added, the train accident occurred due to human error and said he has ordered an investigation into the incident.

Last month, at least three people were killed when a passenger train collided with a freight train at Makli Shah, near Hyderabad.

Jinnah Express passenger train travelling from Karachi to Lahore had collided with the stationary freight train near Latifabad area of Hyderabad, killing a driver, an assistant driver and a guard.